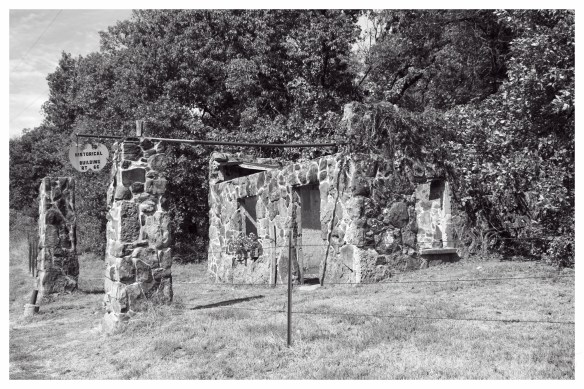 The former Conoco station between Arcadia and Luther, Oklahoma.

Just between Arcadia and Luther, Oklahoma, on Route 66, is a small stone ruin on the side of the road. There’s a homemade sign which says ‘HISTORICAL BUILDING “RT 66”’ but no further explanation.

The front of the Conoco station where the pumps would have once stood.

This was once a Conoco gas station, one of the earliest in this part of the country, and one of the few of which anything remains. Despite its age – it was probably built around the early 1920s and certainly pre-dates Route 66 – there would be little to mark it from any other stone ruin were it not for the fact this little place has a story. But is it story or myth?

This place doesn’t even appear to have had a name – I’ve seen it referred to as the Old Rock station, but that might simply be a handy description rather than an actual title. However, as it stands on the edge of land belonging to the Rock of Ages Farm, it seems as useful a shorthand as any. The gas station had two fuel pumps, one for regular gas and one for ethyl, as well as dispensing drums for oil and kerosene. The latter was necessary because electricity was a long way from making it out to this remote spot and most homes and buildings used kerosene lamps. So far it was no different from the dozens of little gas stations that sprang up to service the growing wave of motorists.

The fireplace at the rear of the store which would have been the only source of heat.

But, so the story will have it, despite bearing the Conoco name, the place fell upon hard times, and sometime in the 1930s, a passing salesman offered to sell the owners printing plates for making counterfeit $10 bills. It was, apparently, too good an opportunity to miss. A small room was built on the back of the already tiny building, the entrance to this hideaway through a rear window which was kept boarded up. The bills were printed one side at a time but clearly they weren’t quite the key to fortune the station’s owners had hoped; when one of them was arrested while trying to pass one of the phony bills, the police searched the fuel station and found the printing plates. The gas station closed and never re-opened.

It’s a great story. The trouble is there is no evidence that it ever happened.

Back in the 1930s, the newspaper was king and Oklahoma possessed several lively papers that covered every scrap of news available. Yet there is no mention of any counterfeiting ring at the Old Rock or, for that matter, anyone from Luther being arrested for just about anything. Counterfeiting was a popular crime during the 1930s and the newspapers of the time covered many such police investigations and trials in huge detail, but not one mentioned anywhere or anything that could be conceivably linked to the Conoco station.

There is no trace of the hidden room at the ruin or even any indication of how it might have been constructed, while the only known photograph of the operating gas station is not only clearly marked ‘1940’ – after the supposedly crime and closure – it also names the two men in the photo as ‘Red Abbott’ and ‘Lyle Melton’ and it’s a reasonable supposition that they either owned or worked there. Red Abbott seems lost to time, but Lyle, 29 years old when the photograph was taken, was from a large family which had settled in Luther. There’s no evidence that he was ever in trouble (least of all for counterfeiting) and, although he and his wife Mary later moved away, they are both buried in Luther Cemetery, along with his parents and four of his ten siblings. None of the family were born in the little town; they were from Christian, Missouri, but clearly they were sufficiently attached to Luther to make it their place of eternal rest, which might not necessarily have been the case if one member of the family had been a notorious local criminal. 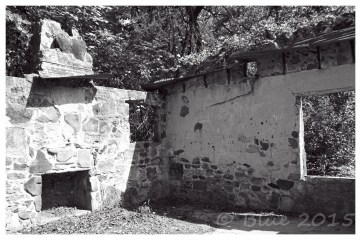 The window in the rear wall was, apparently, the entrance to the hidden room where $10 bills were printed.

It’s not the only dubious but unsubstantiated claim to criminal fame given to Luther. Several notable books on Route 66 state that it was near the gas station that, a few days after Christmas 1950, serial killer Billy Cook abducted and killed the Mosser family from Illinois. However, the unfortunate Mossers didn’t get as far as Luther; when they stopped for a hitchhiker it was between Claremore and Tulsa, some way further east. But sometimes the story is just better than the truth…

1 thought on “A COUNTERFEIT STORY”