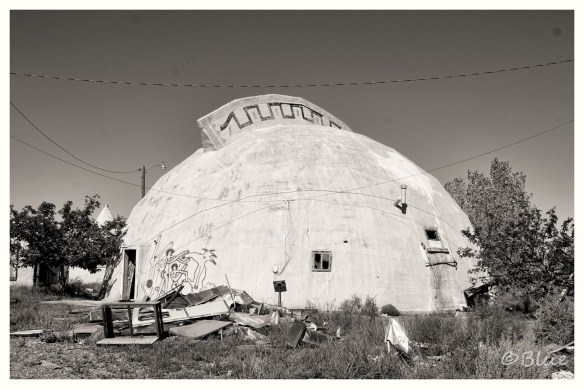 On the long stretch of I-40 that crosses Arizona, a clay-coloured dome breaks up the monotony of the landscape. To the south of the interstate, on what was old Route 66, sits the remains of the Meteor City Trading Post. 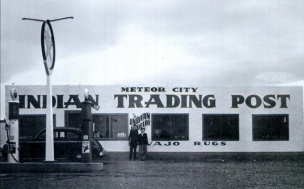 The Newsums outside the original trading post when it still has gas pumps. Probably early 1950s

Six miles from the Barringer or Meteor Crater, the post took its name from the landmark when it was originally built by Joseph Sharber in 1938. Like the other five trading posts between Winona and Winslow (Twin Arrows, Toonerville, Two Guns, Rimmy Jim’s and Hopi House), Meteor City sold the usual mix of Indian souvenirs and also, for the first few years of its life, had a gas station. But Meteor City outlived all its rivals and was also the only one to ever re-open. The fact that Meteor City exists at all is down to one couple, Jack and Goldie Newsum. 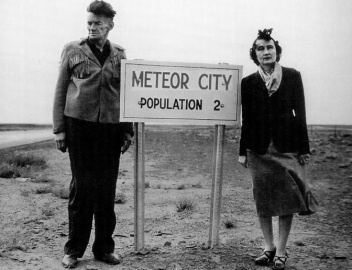 Jack Newsum was born in Iowa in 1900. For several years he worked for the Hammond police department in Indiana before, like so many, lighting out for California, in his case Santa Monica. For whatever reason, he then moved east again, this time as far as Winslow, Arizona, and, in 1941, he bought the Meteor City Trading Post. He said that he had always wanted to live in a city and, in July 1942, the state highway department obliged him by erecting a Meteor City sign.

For the next few years he ran the post alone and then, rather to everyone’s surprise, he went off to Alabama and returned in January 1946 with a new bride, 41-year-old Goldie. Sadly, several revered works on Route 66 consistently misname her as Gloria. However, she was born Goldie Pearl Moman and was never, to my knowledge, known as Gloria. Even when she later became a Justice of the Peace, council records always list her as Goldie Newsum. 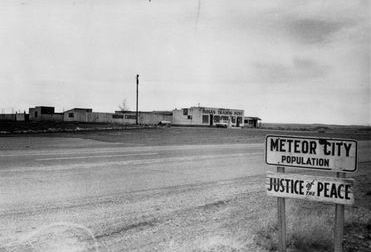 Perhaps the biggest mystery is how Jack and Goldie came to be married. Although her family lived in Florida when she was young, Goldie was born in Alabama – a state to which Jack had no known links – and returned there in her 20s, working as a stenographer for a local textile factory and boarding with the Sport family in Baker Street, Covington. It was a short-lived independence and by the time of the 1940 census the 36-year-old spinster was back living with her parents, the Reverend Arthur Clarence and Hattie Moman, in Covington.

However they may have met and wed, Jack took the opportunity to gain some publicity for the trading post by having the local newspaper photograph the newly-weds by the city limits sign, now with the addition of ‘POPULATION 2’. At the time, Jack told the reporter; “We have left room on the sign for further changes. Maybe we’ll even get a bigger sign.” With the couple both in their 40s, it was a hopeful statement and indeed they never had children. The population did increase to three in 1955 when they were joined by Goldie’s mother, Hattie, after the death of the Reverend Moman.

By now, Jack was in ill-health. He resigned his position as a Justice of the Peace and his wife took up the reins. Urban legend has Goldie known as ‘the wicked witch of Route 66’ for her apparent hard line on speeding offenders, but it’s just as likely bitterness on the part of those caught! Life couldn’t have been easy for Goldie; Jack died in December 1960 and shortly afterwards the trading post caught fire and was moved into another building. The oldest Moman child, Goldie had seen three younger brothers, Chester, Clarence and Porter Lee, die before she was 10 years old herself.

Goldie and Hattie continued to live at and run the trading post until Goldie’s death in 1967. Shortly before her death she said, “We had the population of Meteor City on the city limits sign but we rubbed it out. Can’t ever tell about people these days. Might try something funny if they knew there’s only two people living here, both women.” She was buried with Jack in the Desert View Cemetery in Winslow and Hattie moved to Dallas where her surviving child, Burny, lived and would spend the last four years of her life in Texas. 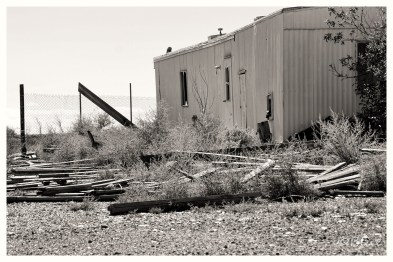 Bob Waldmire’s map, so much lumber on the ground

But it wasn’t quite the end for the Meteor City Trading Post. For most of its life it had been housed in a conventional building but, in 1979, that building was replaced with a geodesic dome designed by Buckminster Fuller. It even had 15 seconds of fame when the dome was featured as a restaurant in the 1984 film, ‘Starman’. It may well have been during this period that the noted Route 66 artist Bob Waldmire created the ‘world’s Longest Route 66 Map’ – curiously, no-one seems to know just when it appeared. 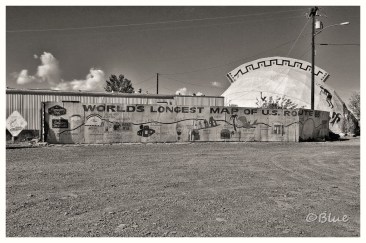 Then, in 1990, the dome burned down. It was rebuilt – the structure that still stands – and changed ownership. In July 2001, Meteor City closed. But that still wasn’t the end. Richard and Ermila Benton bought the place and reopened it. With the help of volunteers from the Hampton Inn hotel chain, the map and six tepees were restored, albeit with more enthusiasm than accuracy. For another ten years, the Trading Post staggered on, people stopping to look at moccasins and the ‘World’s Biggest Dreamcatcher’. But, for the most part, the traffic just kept moving. 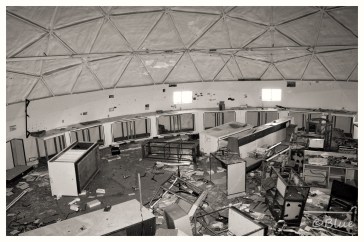 In 2012, Meteor City was offered for sale for $150,000. There were no takers and, in December of that year, the doors closed for good. Now, two years on, those doors stand wide open and the interior of the trading post has been destroyed by vandals. Every display cabinet 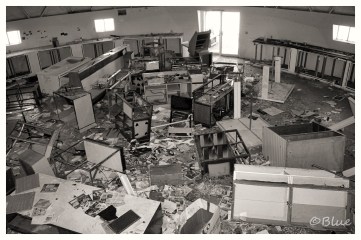 Nothing remains except broken glass and debris

has been smashed, the remains of the map smashed and graffiti sprayed over the ersatz Indian murals. The dreamcatcher, intact and proud when I first visited Meteor City when it was still open, is tattered and probably won’t last another winter. I understand the owners will now take $50,000 for the buildings and its surrounding four acres. Even so, who would be prepared to follow in the footsteps of Jack and Goldie? 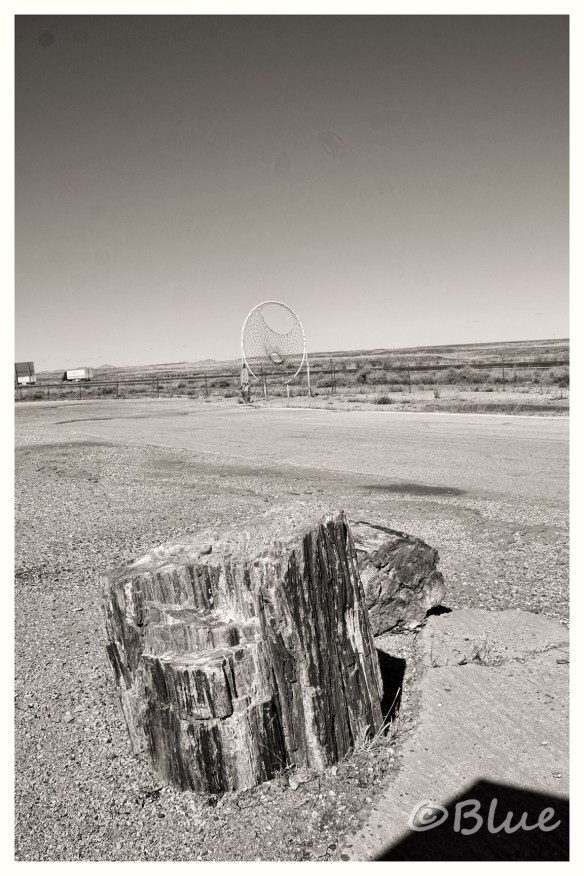 This massive lump of petrified wood has proved too heavy for vandals or thieves. In the background, the tattered dreamcatcher