Frantie Mae ‘Frances’ Hill tending to the graves of her boys, marked then by white wooden crosses.

In Miami, Oklahoma, there is a stop of which many Route 66 travellers are unaware, even the British tourist to whom it would be of most significance. On the side of Route 66 to the north side of town is the Grand Army of the Republic cemetery, which dates back to 1899. Among the thousands of graves spread over 18 acres are 15 sombre headstones in a row, each one signifying the resting place of a young British airman.

One of only six training schools in the USA at the time, the No 3 Spartan School of Aeronautics opened in Miami on 31st July 1941 to train air crew. Great Britain’s Royal Air Force decided that, America having not entered the Second World War at that point and being thousands of miles from the theatres of war, it would be an ideal place to train its airmen. Over the next four years, some 2124 RAF cadets would train in Oklahoma (some under the initial impression that they were actually heading for Florida). Peter McCallum was one of the first cadets and wrote home, ‘You could just imagine what a wonderful place [this] is… All the food is fancy. We fly from 7am till 12.’ Sadly, McCallum was one of the first Miami cadets to be killed when his plane crashed; he is among the British flyers buried in the GAR cemetery.

The Union Jack flying above the RAF airmen’s graves.

Many of the young British cadets were just teenagers, many homesick, and Miami residents took these boys to its heart, but none more so than Frantie Mae ‘Frances’ Hill. She was old enough to be the mother of many of the boys – ten of those fifteen airmen who lie in the GAR Cemetery were 21 or younger – and one of the many Miami folk who welcomed them to the town. Her daughter Rosie, said that her parents’ friendship with the cadets began in the early 1940s when a Miami country club hosted a dance for the young trainee pilots and Frances and her husband, Claude, particularly hit it off with one Jack Taylor. Jack did not survive the war, and when Frances noticed that two of the graves in the GAR cemetery were looking shabby (one of which belonged to Peter McCallum), she decided she had to ‘do something for Jack’s countrymen’.

For the next forty years she regularly walked three miles from her home to tend the graves and plant them with roses and irises. Every holiday she decorated the graves and their simple wooden crosses (these were replaced with stone markers in 2014). She did this without show, but simply because she regarded them as ‘her boys’. She also kept in touch with many of the families, sending them photographs of the decorated graves.

The King’s Medal for Service in the Cause of Freedom; Mrs Hill’s medal was one of 2539 awarded.

In June 1947, George VI presented Frances with the King’s Medal of Service in the Cause of Freedom, but most people in Miami had no idea she had been accorded this honour until after her death. In 1989, the Number 3 British Flying Training School Association erected a monument in her honor with the following tribute: “Mrs. F.M. Hill of Miami, buried alongside, voluntarily tended these fifteen British airman’s graves and helped their loved ones from 1941-1982. These selfless human actions were unknown to most. She was awarded ‘The King’s Medal for Service in the Cause of Freedom’ by King George VI. Thanks to Mrs. Hill from the graduates of Number 3 British Flying Training School Association.”

The marker erected to the memory of Frances Hill from the training school graduates.

She tended the graves without fanfare because she was determined that someone would always care about these young airmen. Until she was too frail, shortly before her death in 1982 at the age of 84 (she had been a widow for over twenty years by then), she made sure the boys always looked smart. Her wish was to be buried alongside the fifteen airmen and that is where she rests. 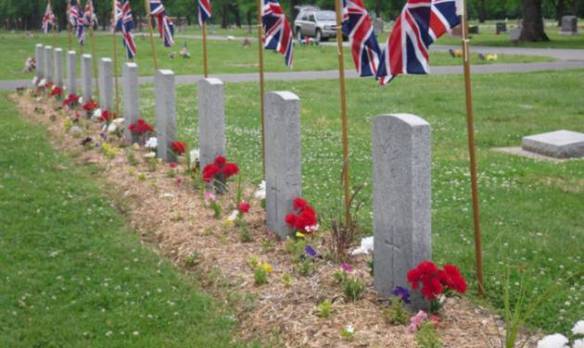 The British Commonwealth headstones of the British air cadets.

7 thoughts on “THE BRITISH AIRMEN OF MIAMI”