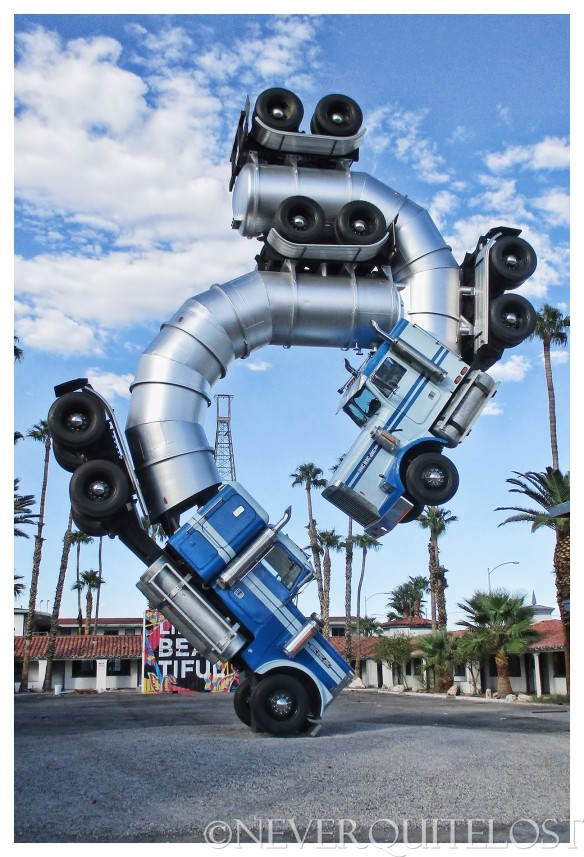 Last year I was covering the Las Vegas Bike Fest for my magazine when I decided I needed a break from the bling. It was also that I wanted to find essential supplies (water, cigarettes, chocolate – the basic food groups) at a reasonable price and I had spotted a small convenience store outside the show. The trouble was there was a security guard and a large fence between me and said shop.

Apparently, no-one was being allowed out this way. I suspect this may have something to do with the event organisers not wanting their visitors to know that, this far south on Fremont Street, life gets real pretty quickly. On one side of the fencing, countless shiny big bucks motorcycles; on the other side, people pushing shopping carts – and not doing their weekly grocery run – or just hanging out in an unnerving way. But the guard hadn’t reckoned without a cheeky smile, a British accent and a determination not to give in. He opened the gate for me while pretending he wasn’t doing it and that he hadn’t seen me.

Sign, complete with naked climbing man near the top.

I don’t know what I’d expected from this end of Fremont Street – probably because I hadn’t even considered the question – but it certainly wasn’t Big Rig Jig. I spotted the sign for the defunct Ferguson’s Motel first, mainly because it had a sculpture of a naked man climbing up it and that’s not something you see every day, even in Vegas. Well, there’s another nekkid man on the sign of the Travelers Motel just down the street, so that’s not strictly accurate. Anyway, as I got closer to photograph the sign I was distracted by the sight of two massive entwined trucks in the motel’s courtyard. Doesn’t take much to distract me, and this definitely did the trick.

Big Rig Jig was originally constructed in 2007 for the Burning Man festival by Brooklyn-based artist Mike Ross. It was finished in time but not without running over budget. It’s made of two discarded tanker trucks, seemingly dancing, and rises over forty feet in the air. (Apparently there’s a viewing platform at the top.) After Burning Man, it was put into storage in California and then resurrected for street artist Banksy Dismaland exhibition-cum-Dystopian theme park in the UK in 2015. Now it appears to have found a permanent home in Fremont Street (it had only just been erected when I stumbled across it), part of entrepreneur Tony Hseih’s ongoing project to revitalise Fremont Street. 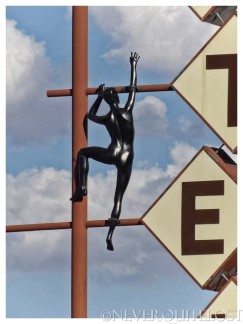 According to the now offline website for the sculpture, Big Rig Jig used the old trucks in ‘referencing a global oil industry at the nexus of our world’s political, social and environmental systems. By repurposing these symbolically rich objects, the artist conveys his admiration for and anxiety over humanity’s power.”

Ross himself says; “It’s just cool to see trucks in the air.” I prefer that explanation myself.

Big Rig Jig in the courtyard of the Fergusons Motel which is currently scheduled for redevelopment into apartments.