Mr and Mrs Kelley on the occasion of their 66th wedding anniversary.

There are stories in every town on Route 66 and, a few years ago, I was lucky enough to have a brief glimpse of one. In 2010, almost exactly seven years ago, Kenneth and Kathleen Kelley of Kingman celebrated their 66th wedding anniversary, appropriately enough on Route 66 where they had lived much of their married life and that was marked with a small gathering of classic cars at the Powerhouse in Kingman to which we were invited.

Kathleen shows off the commemorative plaque given to her by the Route 66 Cruizers Club.

The history of the Kelleys was a quiet but enduring love story. Kenneth grew up in New Mexico and joined the Army at the age of 20. In April 1943, he sailed on the USS Monterey from San Francisco to spend the next 28 months in Europe as a member of the 505 Infantry Division, 82nd Airborne (he chose the Airborne Unit because it paid more money which, as the youngest of eight children, he could send home to his family). 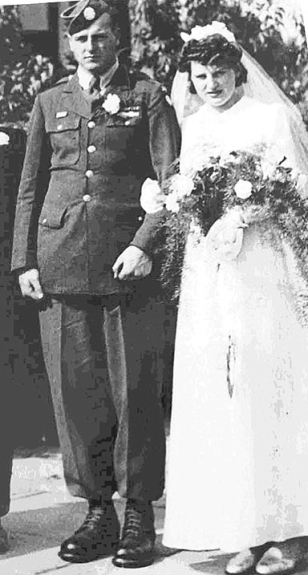 Kenneth and Kathleen on their wedding day on 26th August 1944.

As a paratrooper he saw action, but his biggest battle was to get the girl he met while stationed in England to marry him. The first time he saw Kathleen Denton, Kenneth thought she was the most beautiful woman he’d ever seen. They dated for several months although Kathleen admits to standing him up several times. Kenneth proposed half a dozen times. Kathleen said no six times before finally relenting. They were married on August 26th 1944 in Leicester, England, and a year later, Kenneth was discharged from the Army and returned home. By now, they had a son, John, and Kathleen and John sailed to New York and then took a long train ride to join him; they settled in Deming, New Mexico, where Kenneth started his career in copper mining.

They moved to Kingman in 1962 where Kenneth eventually became the mine superintendent for Duval Mining Corp at Mineral Park and he always said it was the saddest day of his life when the Mineral Park mine closed in 1981. Since moving to Kingman, the Kelleys had lived in a house on Route 66 and so it was appropriate that a local car club should mark their 66th wedding anniversary at the Powerhouse. We found that, despite having lived in America for most of her life, Kathleen’s British accent soon began to return as she talked to us!

Kenneth passed away on 24th December 2016 after 72 years of marriage with his beautiful girl. Not a showy life, not a remarkable life, but a life well lived. It was a pleasure to have met you, sir.

Just minutes after the celebration, the skies opened and this was where we’d been standing!

3 thoughts on “THE KELLEYS OF KINGMAN”