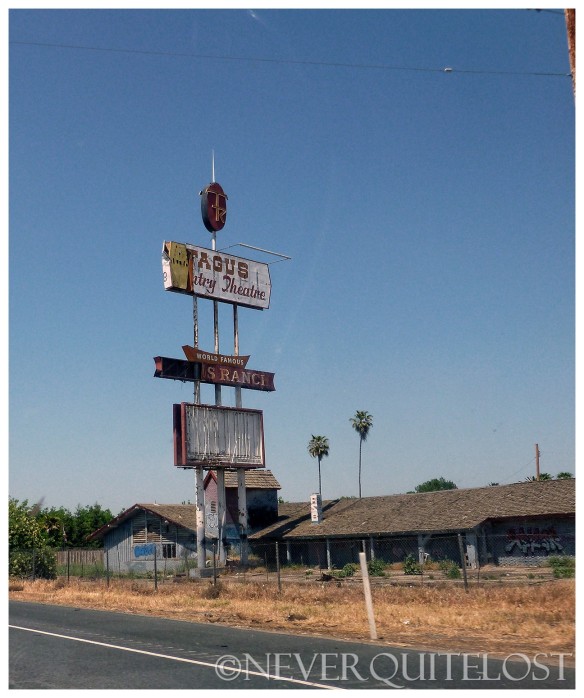 For almost a century the Tagus Ranch, north of Tulare, was an institution in central California. A 7000-acre ranch developed by Hulett C Merritt, it was at the time the largest fruit farm in the world and a destination for migrant workers in the 1930s and, with 11 camps, a general store, post office and a school, entire families lived and grew up at Tagus Ranch; descendants of those workers still meet for an annual reunion. During the Second World War, it also served as a Prisoner of War camp, while it’s said that John Steinbeck began writing The Grapes of Wrath in a little restaurant next to the Tagus Ranch

In 1950, the Tagus Ranch restaurant was opened although it would be gutted by fire in 1958 and have to be rebuilt a year later. By now, both Merritt and his son had died and the ranch land was beginning to be sold off; the last 315 acres would go in 1966. A 60-room motel was built in 1962 to take advantage of the traffic on Highway 99. Three years later the restaurant was destroyed in a blaze once more and then rebuilt again. New owners established the Tagus Country Theater which played host to popular musicians, including Ricky Nelson, The Platters, Merle Haggard and Ray Charles (who played here in 1983).

But, as time went by and franchise restaurants appeared, the Tagus complex began to struggle, particularly from 1972 when much of its passing traffic started to use Interstate 5. It became a Basque restaurant in the 1970s, a bar, a nightclub and finally spiralled down until all that was left was the motel occupied by longterm residents. It was bought in 2000 by Tulare dentist Sarjit Malli who entertained ideas of restoring the Targus Restaurant and, when that didn’t come to pass, tried to sell it, but the only buyers interested wanted to turn it into an adult-only gentlemen’s club. Mind you, the Tagus Ranch Motel had something of a history in this area – in 1964 it advertised in the local newspapers for its nightly ‘fashion shows’ featuring ‘bikinis, baby dolls, lingerie’ with an ad headlined ‘Attention: TRAVELING SALESMEN’.

Finally, in 2014, local authorities deemed the World Famous Tagus Ranch to be an undesirable eyesore and nuisance and, in December of that year, the bulldozers moved in. Mr Malli paid the demolition crew extra to lower the 100-foot sign in one piece although he said at the time he would only be saving the TR top piece and the ‘World Famous’ section. He also added that the sign might be restored, should the site be developed for commercial purposes, but now it seems likely that even the land where the sign and restaurant stood will be lost in widening plans for Highway 99. 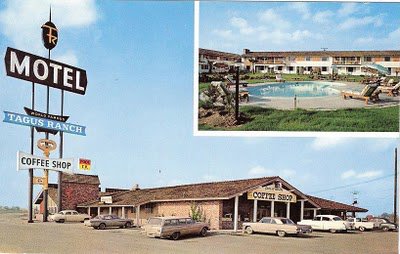