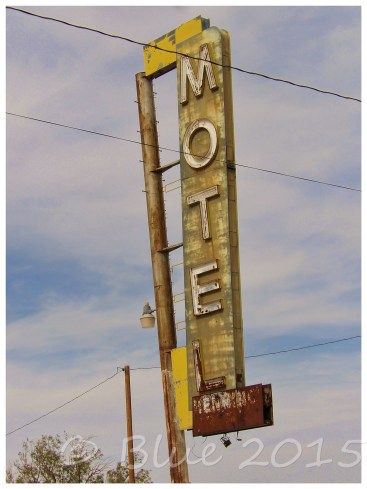 This is another salutary tale of how you should never presume that things will be forever. Perhaps, in Europe, we tend to think of Route 66 as preserved in aspic. But, even if a building is on the National Register of Historic Places, it offers little protection, unlike the UK’s own listing of historic buildings. Many never even make it as far as the register. 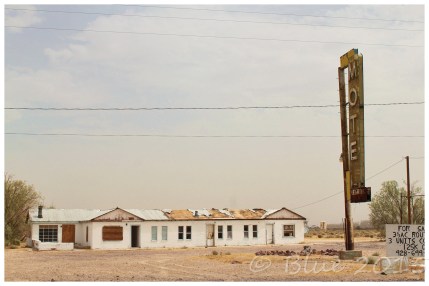 And the Henning Motel in Newberry Springs on the California stretch of Route 66 wasn’t particularly noteworthy. If it were not for the sign, then most people would have taken a photo of the Bagdad Café next door and probably not bothered to raise their cameras for the single storey white motel. No-one knows much about the Henning, least of all why it had an impressive neon sign for what was a tiny motel with just a handful of rooms. Unusually, it was constructed as one building, unlike the cabins of a similar vintage in Amboy and Chambless down the road; as Jack Rittenhouse only spoke of tourist cabins at Newberry Springs in his 1946 guide, it’s fair to assume the motel was built in the 1950s. I found a matchbook that appears to be from the 1930s or 40s which advertises ‘The Henning Motel, 400 East Main Street, Barstow’. It’s possible that the owners moved out here in the 1950s – the Barstow address is now an empty lot, so no clues there.

Look closely at one of the photos of the decaying motel and you will see the reason for its death. Interstate 40 bypassed Route 60 in 1973, running a few yards behind the motel, although it might as well be a hundred miles away. The Henning struggled on for a while – hell, it was even famous for a moment when the film ‘Bagdad Café’ was filmed at what was then called the Sidewinder Café in 1987.

For years, the building has been quietly mouldering away. A hand painted sign outside with a Flagstaff telephone number invited offers of $25,000 for the building and three and a half acres of land. But the motel moved beyond economic repair years ago, while land is not in short supply out here. I passed it fairly regularly, sometimes taking a photo, sometimes not.

And then this summer it was gone. Cleared, the concrete pad the only sign something was once here. The sign is clinging on, overseeing an empty lot and lost memories.

1 thought on “NO ROOM AT THE HENNING”