All aboard for the Techatticup mine!

Long before neon lit up the sky of Las Vegas, people came to Nevada to seek their fortune. And, in the south of the state, many believed they would find that elusive goal in Eldorado Canyon.

The Spaniards first struck lucky in this area, 25 miles from modern Las Vegas, in 1775. But, despite naming it Eldorado, they found only silver on the banks of the Colorado and quickly decided that it wasn’t productive enough. It would be three-quarters of a century before they were proved wrong when Eldorado Canyon saw one of the first major gold strikes in Nevada. In fact, not only among the first but the most lucrative – over the next 87 years the canyon would reveal millions of dollars worth of gold, thanks to the Techatticup, Wall Street and Queen City mines which, in 1872 alone, produced $25.2 million of gold and silver. Montana, another gold boom state, in contrast produced a mere $4.4 million in the same year. 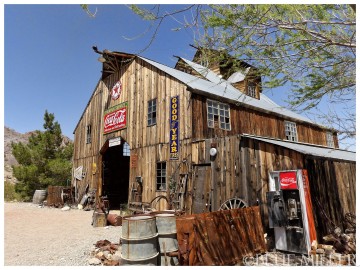 One of the original mine buildings.

The Techatticup was based on the Salvage Vein, a rich vein of gold which ran along one side of the canyon. It was only wealth for a few – the very name of the mine is derived from the Paiute Indian words for ‘hungry’ and ‘bread’. For the first few years, the original miners managed to keep the strike a secret but a gold rush started in 1861, leading not only to the establishment of mining camps but also a reputation for Eldorado Canyon that surpassed the likes of Tombstone in Wild West lawlessness. As well as miners, the region attracted Civil War deserters who believed – rightly, in the main – that the military authorities wouldn’t look for them in such an isolated spot. Although it was served by the Colorado River, Eldorado Canyon was a long way from anywhere. In its early years, the nearest sheriff was 200 miles away and that led to a community rife with crime and murder. Frequently, those involved did literally get away with murder. The Techatticup Mine itself was often a violent workplace, riven with disputes over claims, ownership and labour disputes. Law enforcement refused to even enter the area, and finally, as steamboat traffic increased on the river, a military post was founded in Eldorado Canyon in 1867. In the 1880s, more people lived and worked in Eldorado Canyon than in the entire Las Vegas valley. 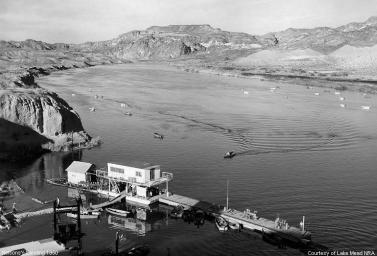 Eldorado itself was eventually replaced by Nelson, a tiny community which still exists as a few houses, and which was named for Charles Nelson. He himself met a gruesome end, killed in 1897 by the renegade Indian, Avote, although Avote’s death toll was far surpassed by another Indian, Queho who we’ll come to in a future post. Five miles east of Nelson, Nelson’s Landing was established on the river, and became one of the business ports on the river during the 1920s. It was washed away in a flash flood in 1974 which swept down the canyon, taking with it nine lives as well as the wharf and buildings. 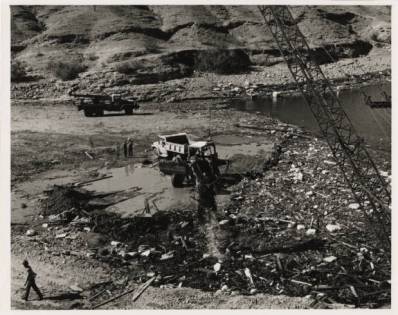 Nelson’s Landing, the devastation after the 1974 flood.

Mining ceased at the Techatticup in 1945, making it not only one of the most profitable but the longest-lived mines in Nevada. (There is indeed still gold in them thar hills, but it would now cost more than it’s worth to extract it.) The mining camp stood empty for almost half a century until it was bought by the Werly family in 1994. Since then, Tony and Bobbie Werly, with the help of their sons and family, have been resurrecting the camp, restoring to their original places a number of buildings, including some from the Wall Street Mine, and giving tours of parts of the mine. Now many visitors who head off of US-95 are armed not with pickaxes but cameras, as the Techatticup has become a popular destination not only for tourists, but for commercial photographers and filmmakers (across from the main building which houses an eclectic collection of historical, well, stuff, is a fake crashed plane from the Kevin Costner film, 3000 Miles To Graceland.)

A film prop left over from 3000 Miles From Graceland, starring Kurt Russell and Kevin Costner.

Over the years, the Werlys have added not just buildings and artifacts, but a collection of old vehicles, from an old Model T water truck to RVs and even a caravan. In the buildings is a treasure trove of signs and items but if you’re wondering why the likes of American Pickers haven’t been here, it’s because they asked and the Werlys said no. This is, they say, history, not Disneyland. The Techatticup Mine is in safe hands.

One of the mine buildings full of stuff. This will be the outboard motor section.

An original mine tank, saved by the Werly family.

No fancy food options, soda and chips are about all that’s available here.