I’ll admit that I will drive a long way for a Big Something, and who wouldn’t drive down to the very south of Arizona to see a 30-foot-tall cow skull? Sadly, it’s not real although maybe that’s a good thing; Arizona can be lively enough without cattle the size of four story buildings roaring about.

This particular skull stands just off Highway 90 on South Nogales Highway, around 25 miles south of Tucson. For years it welcomed diners to the Longhorn Grill although the skull was originally constructed for a bait shop which stood between two lakes, now long gone. Made of concrete, it was the work of Michael Kautza who was also responsible for other huge sculptures in Tucson.

Over its life time, the building it dominated housed various different businesses including a clothing store and a roofing company, but for much of its life it was the Longhorn Grill (as well as featuring in several movies such as Alice Doesn’t Live Here Anymore). In 1993, Ed Madril started the restaurant but, by 2012, business had dropped off so much that the building was in foreclosure. It went on the market with a price tag of $319.000, and then $299,000, but was sold at auction to a buyer from Patagonia, Jeff Ladage, for $155,000. However, that sale fell through.

Back on the market, the Longhorn Grill was purchased by John Gourley for a knockdown $130,000 who turned the place into part events centre, part gallery. Gourley, a metal sculptor and retired real estate broker, intended to add large murals and palm trees and spent thousands of dollars on cleaning the place up. The idea was that it would host weddings, parties and community events. However, Amado is a tiny town with a population of less than 300 people. The Longhorn Grill could accommodate most of them at once (and cook for a third of them at time thanks to its barbecue pit on which could be grilled a hundred burgers at a time) and it seems that the area just didn’t have that much call for an events venue. 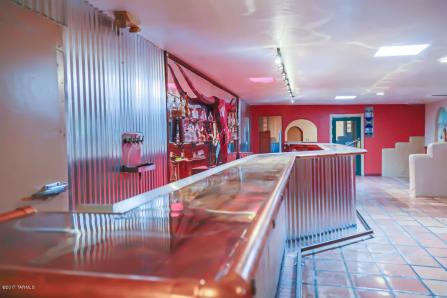 Today the Longhorn Grill and its famous skull are silent and up for sale again for a substantial $325,000. People stop for a photo of the massive head and then themselves head across the road to the Cow Palace for a burger.

1 thought on “THE BIGGEST SKULL IN ARIZONA”