The front entrance still looks as spruce as it must have done in 1928.

Lela in Texas always struggled against the odds. Known to some people who travel Route 66 as the home of E Mike Allred’s Regal Reptile Ranch (see the Never Quite Lost post, Snakes on a Plain), it lost out all around to its more glamorous neighbour, Shamrock.

Lela was established in 1902 as a stop on the Chicago, Rock Island & Gulf Railway, when it was originally called Story. It then gained a newspaper – the Wheeler County Texan – and a small school. Then, the ultimate mark of a settlement came along; a post office. Folklore has it that the young postmaster, a young Texan by the name of Bedford Forrest Bowers, changed the town’s name to Lela in honour of his sister-in-law.. However, there’s a few holes in that story. The town was already called Lela when Bedford was appointed postmaster on 9th June 1903. He was 25 years old at the time and there is no record of him having a wife. He did have two older brothers, but David was married to Maud and Isaac to Anna Pearl, neither of which lead themselves to a contraction of Lela.

Whatever the origin of the name, there was a school in Lela (although the dedicated school wasn’t built until 1907), and the first teacher was the splendidly named Fannie (or Frances) Womble. Miss Womble was barely 20 years old when she assumed that position and was soon married to Lucian Purcell, a relative of John Purcell, one of the school’s trustees. Sadly, the marriage would be cut short. In 1903, Fannie suffered a miscarriage, but two years later she gave birth to a son, Farrel. Complications set in and just ten days after the birth, on 16th February 1905, Fannie died. It was a week after her twenty-third birthday. Little Farrel struggled on, but on 9th May 1905 he too succumbed.

Lela would suffer another loss the following year when Bedford Bowers died, aged just twenty-eight. But already the town was beginning to lose out to nearby Shamrock. Although the discovery of natural gas would bring short-lived renewed prosperity to Lela, gradually both trade and residents began to move to Shamrock. But it was while Lela was undergoing this brief boom that its school burned down. At the time, the town was large and prosperous enough to warrant the building of a fine brick school which would accommodate all grades. However, by the 1930s, it was catering only to the younger children, as the high school students decamped to – yes – Shamrock. 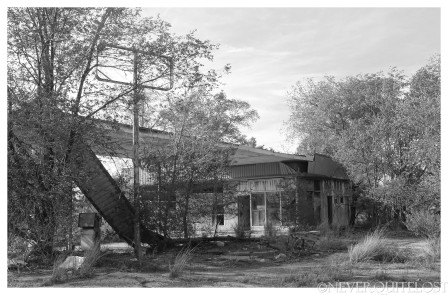 One of the gas stations which sprang up to serve Route 66. It limped on in its last years as JD’s Service Station before falling into disrepair.

Route 66 would bring another infusion of life into Lela, as two gas stations were opened. But it didn’t last. By 1947, there were only 50 people left in Lela; the school and the church staggered on but the remaining businesses gradually closed. Even the newspaper moved down to Shamrock.  In 1976, Shamrock took its final victory over its neighbour as the post office was transferred there from Lela. Fifteen years later, the school was closed and has stood shuttered ever since. There is no chance of it opening again; Lela has no businesses, no shops and little in the way of population. Today it stands empty, echoing to the sound of children’s shouts on a long ago wind.

Incidentally, Fannie’s widower, Lucian Purcell, did eventually marry again and had eight children with his second wife, Annie (he would given his eldest son the middle name of Bowers, presumably in memory of the late young postmaster). They made their home in Shamrock.

Although it has a historical marker, Lela High School is not yet on the National Register of Historic Places.

22 thoughts on “GHOST SCHOOL IN A GHOST TOWN”