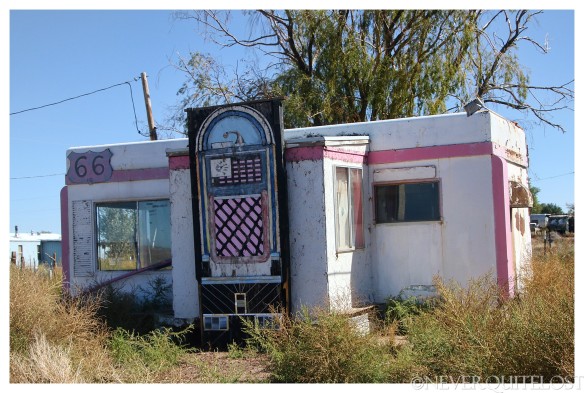 Perhaps the biggest surprise to me about the Route 66 Valentine diner in Sanders, Arizona, is that it does actually look like a Valentine diner. Shabby and sliding rapidly into decay like so many of its peers, but still clearly of its type. 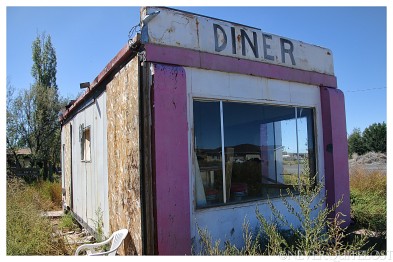 Why a surprise? Well, because, as far as I knew, the Route 66 Diner in Apache County’s Sanders had taken a Valentine diner and gradually eaten it, subsuming the original building into three containers and increasing the space so the original eight stools were replaced by seating for 60 customers. But, by the time I visited a few months ago, all those extra extensions had disappeared and the diner stood by itself, fading under the Arizona sun and having closed its doors on its final customer a few years before.

This particular Valentine prefabricated diner (it was clearly not purchased outright by its first owner as it still has the safe in which the owner would deposit a portion of his weekly takings to be collected by a Valentine agent) was first situated in Holbrook. It was then bought and moved to St John’s although, due to problems with zoning, it was never opened. 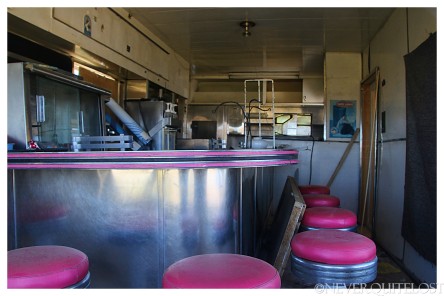 However, it was while the little diner was in St John’s that it was spotted by one Ena Middleton. Ena has true Route 66 heritage: she not only grew up on the Mother Road but is the grand-daughter of the infamous Henry Miller of Two Guns. She says that, peering through the windows, she fell in love with the napkin holders. She bought the diner with her husband, Frank, and then moved it to Sanders. It was then moved once more, still within Sanders, where it was so busy that it had to be extended – the aforementioned containers – although 99% of its trade was local and not Route 66 travellers.

While still open, the Route 66 Diner had been up for sale, Ena and Frank wanting to retire to their land, partly due to ill-health. It seems that there have been no takers, other than for the container extensions to the little Valentine diner.

4 thoughts on “THE VALENTINE DINER OF SANDERS”