The Moonlight Motel shortly after it opened in 1952.

The Moonlight Motel opened in 1952 and, to all intents and purposes, it was a well-equipped place to stay, but just like a thousand other motels. But it was to have a curious history, for, just a few months after it opened, the Moonlight Motel was at the centre of a fascinating story.

In the early years of the 20th century, a fabulously wealthy oilman and his wife decided to adopt the son and daughter of the wife’s sister. Eventually Ernest Whitworth and Virginia Marland adopted the pair and Lyde (Lydie) and George Roberts grew up with the best of everything. Mrs Marland died in 1926 and two years later Ernest Marland annulled the adoption in order to marry 28-year-old Lydie. In 1934 Marland was elected as the 10th Governor of Oklahoma but, after one term the couple returned to Ponca City where, Marland having lost his fortune in a hostile takeover of his company by JP Morgan, they had to sell their huge mansion and move into a small cottage on the estate. EW Marland died in 1941 and Lydie became something of a recluse.

Then, in 1953, she got into her green 1949 Studebaker convertible and disappeared. It was a mystery of the time – the Saturday Evening Post ran a story called ‘Where is Lydie Marland?’ – although she continued to pay the bills on the cottage. Where was she? Well, for three or four months she lived in unit #1 of the Moonlight Motel in Independence. There she even asked to help owner Chester Andes’ wife with cleaning because, as she said, she’d never had a job before. And then one day she was gone. A year later the Andes realised who their guest had been. 22 years later she returned to Ponca City and lived in the cottage until she died in 1987.

In 1966, the Moonlight hit the headlines again after Raithby Roosevelt Husted made a statement in room #9 that three months earlier the FBI had kidnapped him, put him into a padded cell and drugged him after he had given them evidence against the Minutemen. While giving evidence in a firearms trials against Minutemen members he admitted his statement had been false. Husted appears to have been something of a fantasist who wanted to be a spy, even taking correspondence courses on how to become a criminal investigator.

But that wasn’t the last time the Moonlight would court notoriety. For many years the Moonlight was owned by property developer Paul O Johnson who, despite owning five motels, claimed not to have a bank account. Johnson had a reputation for litigation, failing to keep up maintenance on his properties and would eventually be sentenced to a jail term for filing a false claim. As the 1970s rolled around, the motel slid downhill, becoming the regular scene of drug busts. Then the owner had the grand idea to start showing adult movies with a day rate of $10. A month later the place was raided and the manager, Steven Ballew, charged with showing indecent films – and he was showing them 24 hours a day. The case was dismissed due to incorrect search and seizure procedures.

There was little subtlety in the Moonlight’s advertising. It ran countless ads like this in the local newspaper.

Some months later the motel started showing X-rated films again and, almost a year to the day since the first raid, officers descended on the motel again, arresting the new manager. This time they had all their ducks in a row, two plain clothes officers had even rented a room beforehand to watch some naughty movies. A case went to court to ascertain whether one film, ‘The Opening of Misty Beethoven’ was obscene. Apparently, it was. The problem was that each film had to be judged as obscene individually – and the Moonlight had as many as 30 films available every day. Independence prosecutor Charles Sandage threatened to file charges every day against the motel.

Where the adult movie centre of Independence stood is now a hardware store. You can make your own jokes up!

The owner of the Moonlight, Bob Haskell (who conveniently lived outside the jurisdiction of the court as so couldn’t be prosecuted), pitched the whole affair as the Moonlight Motel taking a stand for personal liberties and against obscenity laws. In the end there was no need. In July 1980 a Missouri health official visited to order the motel to be closed for violating health and safety codes but found the place abandoned. A month later the Moonlight Motel burned to the ground. Today a hardware store stands on the site that once hosted a missing socialite, a would-be spy and an adult movie empire. 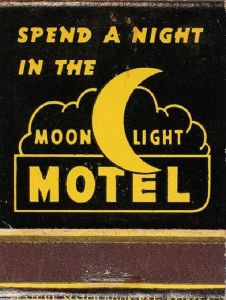 An early matchbook from the motel.

1 thought on “THE CURIOUS CASE OF THE MOONLIGHT MOTEL”