Nothing is a modern ghost town. Well, it was never even really a town. It was established in 1977, 100 miles north west of Phoenix on US-93 between Kingman and Wickenburg; essentially a gas station, small mart and a ADOT motorist callbox. It did, however, have a town sign which read ‘Town of Nothing Arizona. Founded 1977. Elevation 3269ft. The staunch citizens of Nothing are full of Hope, Faith, and Believe in the work ethic. Thru-the-years-these dedicated people had faith in Nothing, hoped for Nothing, worked at Nothing, for Nothing.’

By 2005 it was abandoned and the gas station began to collapse a few years later. There was a brief hope that Nothing would come to something when maker of bespoke wood-fired pizza ovens, Mike ‘Pizzaman Mike’ Jensen bought the site and opened a pizza parlour briefly in 2009. As well as tempting motorists with pizza, he also had plans for RV parking, cabins, a mini mart and truck parking.

But he found that the battle against County Health, Building, Planning, Zoning and ADOT was impossible. Mike says; “The Health Dept. refused to issue a Mobile Food License if I was Based in Nothing. Building, Planning and Zoning stated it was residential and I needed to apply for commercial and basically start over as Nothing exists in Nothing, while the DOT wanted me to pave the whole front and maintain it as my right of way. With all this said and done, since I could not sell anything in Nothing – not even water without a hefty fine – it left me no choice but to leave Nothing. So when you own Nothing, you have Nothing to lose.”

Now the gas station has gone completely, the one remaining building is boarded up and the posted site is full of rubble. The planned route of I-11 goes straight through here, so one day there may truly be nothing at Nothing. 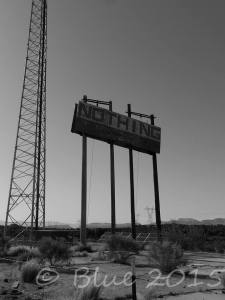 1 thought on “MOVE ALONG, NOTHING TO SEE”