Just short of the ruins of Palmetto, Nevada, is the grave of Clyde Marshall Hart, born on May 7th 1903 and who died of diphtheria on December 3rd 1906. Apparently his 2-year-old brother Kenneth also passed just five weeks later. That is according to the official records, although the Blair News, a local newspaper of the time, reported that the boys died just a week apart.

Clyde was two years old himself when his parents, Victor and Lydia, moved to Palmetto from Santa Rosa, California, no doubt hopeful of making that big strike and never dreaming they would lose both their sons so tragically. The marker only mentions Clyde, and people have often assumed that Kenneth was buried with him. However the little boy lies alone, his younger brother having died and been buried in Silver Peak, another town to the north west. The Blair News reported that Mrs Hart had ‘been quite ill for several days prior to starting for California, her illness being aggravated by the mental anguish of the loss of the children in so short a time.’ 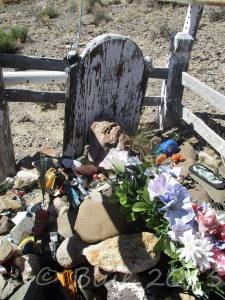 After burying their children, the Harts continued back to California; Lydia gave birth to a son, Alan, almost exactly a year to the day after Clyde’s death, and a daughter, Evelyn, in 1910. Both Lydia and Victor lived into old age, Victor dying in 1958 at the age of 80 and Lydia living until she was 97 and they are buried beside each other in the Oddfellows Cemetery in Sacramento. Having lost two children so young, it must have been a consolation that their son and daughter lived long and full lives. Alan died in 1994 and Evelyn just nine years ago aged 96. Did the family ever come back to Palmetto to visit the grave or was it too painful a part of their life?

At some point in the past, someone decided that the little boy’s grave should not just disappear into the landscape. It’s highly unlikely that his parents erected the railings and definitely not the original headstone which mistakenly gives Clyde the initial ‘W’, as well as inscribing the wrong year of death.

I thought at first how odd it was that there are no other graves in the area, but because Palmetto existed for such a short time – the silver that was struck lasted barely a year – it could be that the little Hart boys were the only people to die out in this lonely place. But the toys and paraphernalia on the grave (I left a toy car) show that they are not forgotten.

1 thought on “A GRAVE IN THE DESERT”