Santa Claus is north-west of Kingman on US 93 and began life in 1937 when Los Angeles realtor Nina Talbot bought 80 acres in Arizona and began a motel (originally called the Kit Carson Guest House). For reasons best known to Mrs Talbot, she decided to give the place a Santa Claus theme, probably with the intention of attracting buyers for the surrounding lots. She did claim to be the biggest real estate agent in the area, although that may have had more to do with the fact that she weighed over 22 stone than her business acumen. 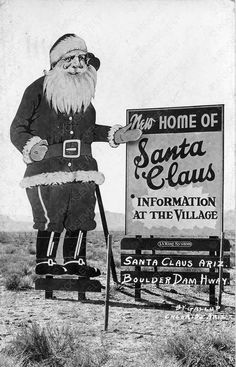 IN THE 1940S, THIS GIANT BILLBOARD ENTICED VISITORS AS THEY PASSED OVER THE HOOVER DAM

While building Santa Claus’s village in the middle of the Arizona desert seems an odd idea, it turned out to be surprisingly successful in attracting tourists, but not in selling the parcels of lands. Although it was designated a town, the only people who actually lived there were those who worked at the inn or in the US Post Office or the land sales office. Mrs Talbot sold the place in 1949 by which time it was a genuine tourist attraction.

The land sales office was converted into a Texaco station and Kit Carson’s Guest House was renamed as the Santa Claus Inn and, in the 1950s, the Christmas Tree Inn. It had Santa’s Workshop, the House of the Three Pigs and Cinderella’s Dolls House and the ‘Old 1225’ train.

Curiously, for a roadside attraction, it had a very good air-conditioned restaurant which noted food critic Duncan Hines called one of the best in the region. (Mind you, if you know the Kingman area, you’ll know there’s not all that much competition).

Robert Heinlein wrote about it in ‘Cliff and the Calories’, a short story published in 1950, listing the menu’s dishes, while Hollywood legend Jane Russell would host a dinner for ten friends at the restaurant four years later.

Santa Claus’s busiest time was, fittingly, December of each year when, for 25 cents and a stamp, employees would write to children, the envelope postmarked Santa Claus. Thousands of letters were sent out to hopeful kids.

But, by the 1970s, Santa Claus was in terminal decline. Although, back in the 1950s, there had been plans to capitalise on the Christmas theme by setting out streets with festive names (like Prancer Parkway), people only stopped in Santa Claus long enough to eat a meal or fill their tanks. It was up for sale for $95,000 in 1983, the then owner turning down an offer of $50,000 because he felt it was worth more. He relisted it in 1988 for $52,500. It’s still for sale. It was removed from the Arizona state map, the last remaining businesses closed in 1995, and the surviving residents moved out, too.

THE HOUSE OF THE THIRD LITTLE PIG AT ITS PRIME

THE HOUSE OF THE THIRD LITTLE PIG TODAY

Sadly, its roadside location in the middle of nowhere, the very thing that made it a success for weary travellers on the way to Las Vegas, has been its downfall as vandals moved in. And children’s letters to Father Christmas? They now go to Santa Claus, Indiana.

1 thought on “SANTA CLAUS IS COMIN’ TO TOWN”