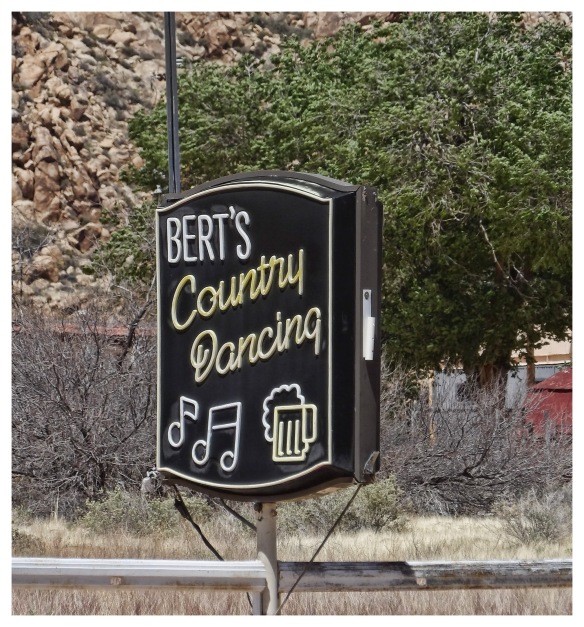 On a lonely stretch of Arizona’s Route 66, between Seligman and Kingman, where the loudest sound is the wind or a lonesome train horn or the skitter-skatter of tumbleweed across the tarmac, stands a tiny bar where once Saturday nights echoed to the sound of fiddle and guitar and boots tapping on a wooden floor.

Now the music has fallen quiet, but the sign in Valentine still remains, attracting and perplexing passers-by as to what exactly was Bert’s Country Dancing. Bert’s Country Dancing was a legend, but a small and modest legend in the way that people do things out here in a big country. Back when Bert Denton opened his little bar once a week on the side of Route 66, Valentine still had a population in three figures. In fact, in the 1970s, around 200 people lived in this tiny community. And then, of course, the interstate took the traffic away – and out here that meant it took the traffic miles away, not just a few yards away on the other side of a frontage road – but, for a while the people stayed and, on a Saturday night, they danced.

Bert Denton was born Elbert Riggs Denton on 28th February 1915 in Grants, New Mexico, the middle son of Elbert Sr and Ora Denton. The family would move to southern Arizona when all three boys, Edward, Elbert – or Bert – and Robert, were still small. Bert was 19 when his father, a cowpuncher, was bucked from a wild horse and died of a fractured skull the following day. But it didn’t deter the young man from becoming a cowboy and rancher himself and, for most of his life, he was involved in cattle ranching. While living in Gila County, Bert met Marjorie Myrtle Lan (always known as ‘Margie’). Margie had been previously married in 1930 when, at the age of 16, she wed Benjamin J Hinds who worked for the Inspiration Copper Co and lodged with her family. They had three children, Benjamin, Felix and Ruth, but the marriage didn’t work out and, by the time Benjamin was married in 1956, Bert was named in the announcement of the wedding as his father. 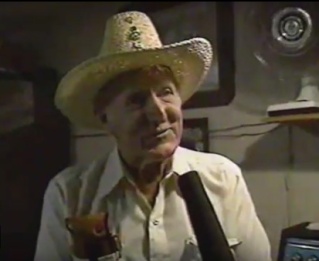 A tough man at work, and one who served in the US Navy for over three years, Bert had a softer side, demonstrated in 1956 when the Arizona Republic published a photo of a litter of ten puppies housed at the city pound. The next day, the Denton household had one dog extra…

Both Bert and Margie were keen horsespeople and both qualified as Arizona 4-H horse show judges in the 1960s. Sadly, it wasn’t to be a long retirement, for Margie died at their home in Valentine in October 1976 at the age of just 63 years. It seems that Bert’s Country Dancing came into being shortly after this and it’s tempting to think that it was a way for the retired rancher to fill his time, as well as playing fiddle, guitar and harmonica in the band. He only ever wanted it to be a small country bar and the dancing was, dare I say it, more important than the dollar beer.

Closed, but the building is still hanging in there

But Valentine struggled in the modern day and tragedy beset the tiny settlement when post mistress Jacqueline Griggs was murdered in 1990. Two years later, the Arizona Republic newspaper carried a small piece on Valentine which, unsurprisingly, featured Bert, by then one of just 14 residents. He joked then that they were ‘dropping like flies’. Less than two years later, on New Year’s Day 1994, Bert himself died at the age of 78.

For a short time, Bert’s Country Dancing occasionally opened – for special events such as the 2002 Fun Run – but the little bar has been closed for many years now. But perhaps, sometimes, if you listen very hard you might just hear a few bars of fiddle music disappearing on the wind.

3 thoughts on “ONLY ON A SATURDAY NIGHT”

Leave a Reply to Zwei Waldkraiburger on Tour Cancel reply