In its prime, Hinton Junction could sell you gasoline, a meal, a night’s sleep and even a bus ticket.

These days, old Route 66 between Bridgeport and Hinton is a lonesome place. True, you know that Interstate-40 is rumbling away somewhere to the south, but here you’re on your own, your reverie on the old straight rolling concrete broken only by the glimpse of an occasional farmhouse or the moo of a curious cow.

But it wasn’t always so. Once this was a busy highway and the service station, cafe and motel belonging to the Littles of Hinton was a welcome sight for many travellers. Leon Little was born in 1911, the youngest of five children of James and Jennie Little. The Littles had something of a casual attitude to names, it seems. Leon was named Wilbur Leon, but, by the time his name was entered on the 1930 census, he had become simply Leon, while his brother went by the name of Robert or Boone, depending what form he was filling in.

From the time he finished the 12th grade – and probably before – Leon worked in a service station, moving to Booker, Texas, in 1929 where he met a young lady by the name of Anna Louise Ondracek (although she was always known as Ann). When they married on 27th October 1932 in Booker, Texas, he had just turned 21 and Ann was 18. But, starting a business was important to them and, within months, they had bought an old gas station next to the swing bridge at Bridgeport on Route 66. Leon clearly realised just how vital an artery Route 66 was and, when it was realigned, he took the line that if the traffic wouldn’t come to him, then he would go to the traffic.

In 1934, a new bridge was opened over the South Canadian and Route 66 was rerouted. The Littles were already ahead of the game, building a new gas station at the west end of the bridge where Route 66 and Highway 281 met and opening it at the same time as the new alignment. 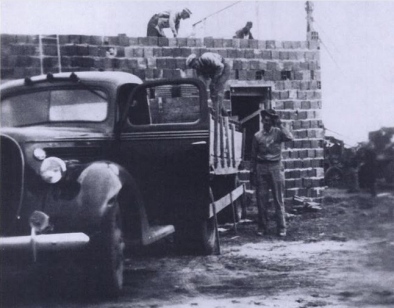 Leon (standing) oversees the construction of his new service station.

In 1940, the same year that his father died, Leon built a third station and added a cafe and a small motel. A larger house too was essential as by now the Littles had started a family. Bobby Dean was born in 1936 (puzzlingly he is referred to in the 1940 census as Baffie D), followed by Larry in 1944 and Charles the following year. For a short time they also had a young teacher, Pearl Delores Kerlick, boarding with the family before she got married, while, following ‘Jim’s’ death, Jennie Little would come to live with the family until she died in 1969.

The Littles had established that third station and motel when, in 1943, Leon received his draft papers. He was granted a 6-month deferment to get his affairs in order and so he leased the gas station, motel and cafe to GB Entz. Entz immediately shut Leon’s business down and opened his own in a new building. Ironically, by the time the six months were up, the US Government had set the upper limit of the draft at 30 years old. Leon was two years older than that and so he should have immediately picked his life and business up again. But he had made a contract with Entz and he honoured that. Instead, he spent the next couple of years working as a mechanic and tow truck driver in Texas. When the lease was up in 1945, he returned to Hinton and he and Ann began the job of rebuilding their business.

In his 50s, foreseeing the end of Route 66 and his business, Leon retrained as a US Postmaster,

This they did with determination and hard work. They also had a keen eye to providing good service for travellers. But Leon also knew that times were moving on and that the plans for the new interstate would make his business impossible to sustain. A year before I-40 bypassed Hinton, Leon had already made plans for his next career, training as a postmaster. He began work at the Hinton post office while Ann continued to run the business and then, in 1962, the interstate opened and Route 66 stopped. The Littles had opened their main business on the day that Route 66 took on its new alignment across the new bridge in 1934 and, with fitting symmetry, they closed it 26 years later on the very day that the interstate opened.

This centre section is all that remains today of the gas station and cafe. There would have been a clock in the hole in the centre roofline, while the EAT sign was lost many years ago. The propane tanker hasn’t moved in at least 35 years.

However, hard work over those years had meant that Leon and Ann could put their boys through college as well as buy a house in Hinton. Until he retired, Leon worked at the post office and Ann worked as a receptionist for the Hinton Clinic. With sons and, later, grandchildren, Leon was involved in the local community, coaching Little League baseball and becoming a 32nd degree Mason. He died on 3rd February 1994 and Ann passed away at the end of 2006. They are both buried in the town they loved and served for so long.

Oh, and Leon clearly hated his given name all his life. Even on his gravestone in Hinton Cemetery he is listed only as W. LEON LITTLE!

The gas station is falling down these days, but you can still see the old shelving and how it was back in the day.

22 thoughts on “THE LITTLES OF HINTON JUNCTION”