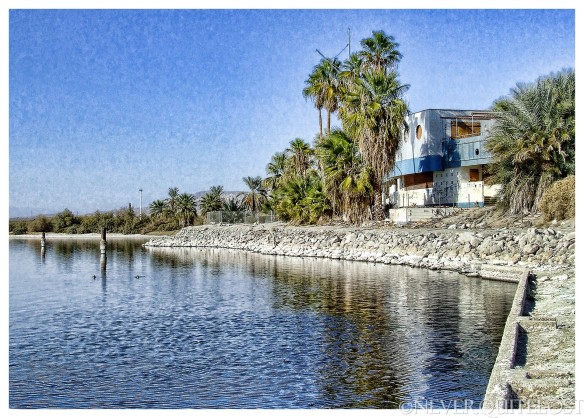 Half close your eyes, ignore the smell of rotting fish and you could see why this was such a popular place in the 1960s. The pilings to the left are the remains of the boat jetty.

The North Shore Beach and Yacht Club began construction in 1958 at a time when that accidental sea, the Salton Sea, was an up-and-coming destination and not the dead fish-ridden wasteland that much of it has become today.

Back when it looked like the resort would last forever.

Back in the 1950s, there was a multi-million dollar plan for what would become California’s largest marina and the jewel in the crown was the yacht club, designed by architect Albert Frey who was responsible for ‘desert modernism’ and whose influence on Palm Springs remains to this day. Frey delighted in the idea of creating a ship in the middle of a desert by a sea that shouldn’t exist, and his design is evocative of a boat with a curved prow, mast, crow’s nest lounge and porthole windows. It soon became popular, promoted as ‘The Glamour Capital of the Salton Sea’, and Dean Martin, Frank Sinatra, Jerry Lewis, the Beach Boys and the Marx Brothers all visited the club.

One of the developers who built the yacht club was Ray Ryan, who had been responsible for the restoration of the El Mirador Hotel in Palm Springs and later opened the Bermuda Dunes Country Club. Ryan was a flamboyant character who, it was whispered, had connections to the Mob. Stepping out of the Olympia health club in Evansville, Indiana on 18th October 1977, he got into his new Lincoln Continental Mark V coupe and turned the key. The car exploded. Ryan was killed immediately, the power was knocked out over the south part of Evansville and it took two days to find all the pieces of the Lincoln.

From a LA Time supplement of April 1963. The yacht club is in the middle left, with the pool clearly visible. The jetty was destroyed in 1981, and the motel at the top of the picture in late 2008.

Without Ryan, it’s unlikely that North Shore would have been the destination spot that it became in the 1960s, but even he could do little about the twin forces of a recession and environmental problems, both of which ensured the resort’s downfall. As the development boom went bust in the 1970s, countless lots were simply abandoned, while water pollution saw the number of visitors fall. Flooding compounded the area’s problems and, in 1981, a flood destroyed the North Shore Marina’s jetty. If people couldn’t dock their boats, they wouldn’t visit. Many took their boats away from the Salton Sea entirely as they found the increased salinity clogging expensive marine engines.

By 1984, the yacht club was forced to shut its doors. Eventually it fell prey to vandals who exacerbated the interior damage caused by its use as a film location in 2005 (the front was also painted with the name ‘Aces & Spades’ for the movie The Island and the inside gutted) and to skateboarders who treasured the yacht club’s now-empty swooping pool. 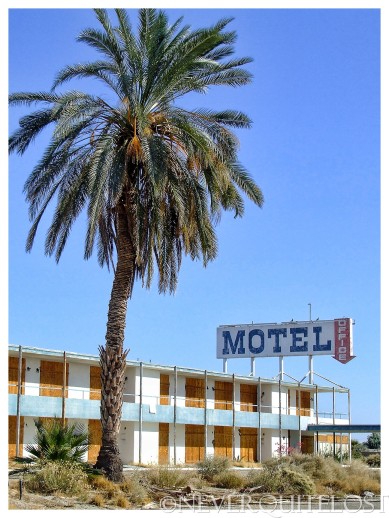 The North Shore Motel close to the yacht club. The motel was torn down a few months after this photo was taken.

But that’s not quite the end of the story. The North Shore Yacht Club looked like this when I first visited in 2008. There was a large motel nearby, albeit also boarded up. When I returned three years later, the motel had been razed to the ground but, to my surprise, the yacht club had been restored to its former glory. It was, apparently, intended for use as a community centre and home to the Salton Sea History Museum. But here’s the rub; the owners of the property terminated the museum’s lease after a handful of years, forcing the museum into (hopefully temporary) closure, while every time I’ve been there, the place has been firmly shut up with no indication of any future community events to be held there.

If a club designed to look like a ship in the desert was incongruous, the site of a restored and repainted disused building at North Shore is even odder still. 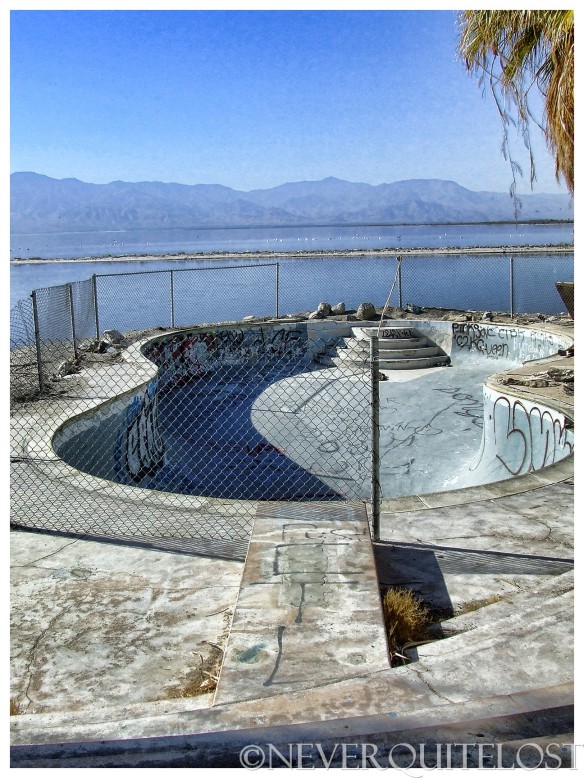 4 thoughts on “NOT QUITE SUCH A SHORE THING”