With its Mission-style architecture, the school was the grandest building in town.

Almost every traveller on the section of Route 66 between Seligman and Kingman, Arizona, stops at the famous Hackberry General Store. But few realise that there is more to Hackberry than a cold soda and some picturesque photo opportunities with old cars. Just to the south of the General Store and Route 66 lies the remains of what was, from 1874 until shortly after the Great War, a thriving town.

Originally a mining camp at the foot of the Peacock Mountains, Hackberry supported the twin trades of ranching and mining – indeed, it was the former that brought the railroad to Hackberry in 1882, as much to transport cattle as to carry ore from the Hackberry Silver Mine. By the time the mine closed, some $3 million of gold and silver had been dug out and perhaps one of the obvious indications of the temporary prosperity of the town can be seen in its now disused elementary school.

By the time this photo was taken in 1924, the school had been open for 7 years. Sadly, I don’t know whether the teacher is the ‘pleasant young Miss Jones’. Photo courtesy of the Mohave Museum of History and Arts

At a time when most schools were little more than wooden shacks or barns (for example, the Red School in Valentine to the west), the community of Hackberry commissioned a rather grandiose stone building. In May 1917, the School’s Board of Trustees called for bids for the erection of ‘a one-story public school building, to accommodate at least 80 pupils and cost not to exceed Seven Thousand Dollars; building to include all necessary wardrobe closest, teacher’s room, library room, etc, and to have chimney and fresh air vents for heating and ventilating purposes and to be as nearly fire-proof as the sum to be expended will permit.” You have to love that ‘nearly fire-proof’, but clearly not if it was going to cost more money!

The design that was accepted turned out to be a quite ornate Mission-style building with red roof tiles, two tiny decorative towers and even a Spanish-style bell. Nor did the Trustees hang about once having made a decision. At the end of August 1917, the Mohave County Miner reported that contractor Axel Ericson was completing the cornice work on the school (incidentally, Mr Ericson had just won the contract for his next job, which would be installing radiators and steam heating in the Hotel Brunswick in Kingman).

The bell still seems operational, but I decided not to try…

The school had two classrooms, two bathrooms, a kitchen and living quarters for a teacher, one of the first of whom was a Miss Jones who, a visit to Kingman being enough of an occasion to make the local newspaper, was described as ‘a pleasant young teacher’. To the young children who attended Hackberry Elementary School – they ranged from kindergarten age to the 8th grade – the building must have seemed almost like a castle. Teachers came and went; children grew up but often stayed in the town. Many of them were Griggs and several generations of that family were taught in the school. In fact, virtually everyone in Hackberry now (although that’s only around 20 people) is either a Grigg or related to the family. 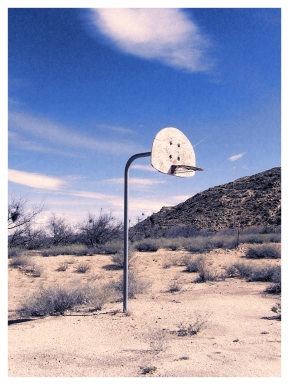 An abandoned basketball hoop beside the school.

But, by 1994, the Board of Trustees (all of them, by the way, retired and without children in the school) decided that the little school should be closed. The parents of the 22 remaining pupils fought the decision but without success, even though the reasoning seems in hindsight a little vague. Joseph Averna, one of the three Trustees called the school ‘inefficient and ineffective’ (it quite possibly was, the tendency to follow the curriculum was, by all accounts, less than enthusiastic) and, on the eve of the meeting to decide the future of the Hackberry Elementary school, proclaimed; “We are going to drag [the parents] kicking and screaming in the 20th century. The people who pay the bills want the school closed.” He then went on to admit that no-one had actually looked at a budget, nor did they know how much money would be saved by the closure. Nonetheless, the decision to shut the school was made the following day.

Today children are bussed to schools miles away, leaving Hackberry as more of a ghost town than ever, while the school – which is owned by the Grigg family – stays resolutely shut and fenced off. The family hopes one day to refurbish, but no new generation of Griggs will ever be taught there.

Hackberry Elementary School, still as if the children had just left for the day.

22 thoughts on “THE HIDDEN SIDE OF HACKBERRY”