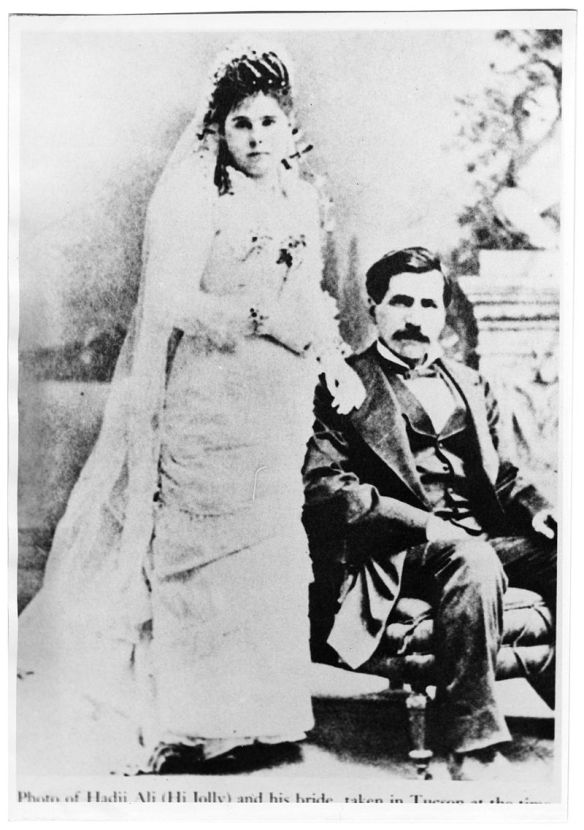 Hi Jolly and his bride, Gertrudis Serna. She refused to take him back after his decade-long disappearance to prospect.

In 1855, US Secretary of War, Jefferson Davis, came up with an idea to use camels for military purposes in Arizona. The idea was logical, given the heat and terrain of the Arizona desert, and over the next two years some 77 camels and 6 handlers were imported into the West.

Although an initial expedition with half those camels led by Edward Fitzgerald Beale across southern California was deemed a success, the experiment proved pretty much a disaster. The camels didn’t get on with the horses and mules on the trek; the handlers had trouble getting paid and three of them demanded to go home to Syria; the businesses supplying mules to the military were, unsurprisingly, very vocal in their opposition to the experiment; despite their desert environment, the camels suffered with stones and goat heads in their hooves. But the final death knell for the US Camel Cavalry was the Civil War. Most of the camels were kept at Camp Verde and when it was seized by Confederate forces, the animals were allowed to wander away.

The best known of the camel handlers was a Turkish-Greek Muslim called Hadji Ali, who, when soldiers had trouble with his name, became known as Hi Jolly. After the failure of the camel experiment, Hi Jolly kept a couple of animals to pull a wagon while he was trying his hand as a prospector. He later returned to the Army as a mule handler where he worked until 1886, but the lure of gold (or silver or copper) was too much and, in 1889, with the few camels he had left, he left his family and returned to being a wandering desert prospector. Ten years later, and with his health declining, he came back to Tucson and begged his wife to take him back. She refused, and one can hardly blame her.

For the last few years of his life, he lived in Quartzsite, Arizona, and in 1934, 32 years after his death, a pyramid monument topped with a camel was placed on his grave by order of the Arizona State Highway department, a more elaborate version of the wooden pyramid his friends had constructed for him after he died.

And the camels? Some of those released from Camp Verde were rounded up and acquired by circuses and zoos, but those that had been turned loose continued to roam across Arizona for years, small herds spreading to Nevada, California and New Mexico. Legend has it that Hi Jolly died while hunting the legendary ‘Red Ghost’, a red camel which had trampled a woman to death. If so, he was several years too late – the Red Ghost had been shot in 1898.

1 thought on “THE CAMELS OF ARIZONA”