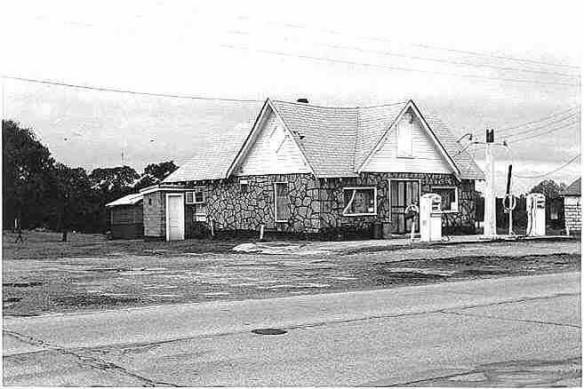 The last stop Carl Beach would ever make – the Threatt Filling Station in Luther, Oklahoma.

Murder was all too common along Route 66 when it was one of the arteries of America. Unfortunately, some were an easy target for those who felt that the contents of travellers’ wallets should be in their pockets and sometimes weren’t too discerning how they achieved that. This is one of those forgotten stories.

In 1948, former New York railway worker, Carl Beach, was driving west to Amarillo, Texas. Just outside Indianapolis on 1st November he picked up two young hitchhikers, Max Eugene Klettke, 23, and Harry Riskin, 18, both from Lansing, Michigan. It was a terrible mistake.

While Beach stopped in Miami, Oklahoma, to have a windshield wiper fixed, Klettke and Riskin were already talking about ‘knocking the old man on the head and taking his money’ as Klettke admitted later. Klettke was set upon a delinquent path; brought up in children’s home after his father deserted the family and his mother died of tuberculosis, he had first been arrested for car theft when he was 17 and then had served 15 days in jail in 1946 for reckless driving and using ‘indecent language’ to the sheriff when he was arrested. The year before taking off with Riskin, he had been paroled from a sentence of 6 months to 5 years in the Ionia reformatory for stealing a car. Now, for whatever reasons, he was about to take a huge leap from car theft to murder.

Ulysses Threatt, of Threatt’s Filling Station (the first black-owned service station on Route 66) near Luther, Oklahoma, testified that the trio in Beach’s 1937 Buick had stopped at the station where Klettke had complained that Beach wouldn’t buy him a cup of coffee or even offer him a cigarette, and that Beach had seemed very nervous as he paid for his gas.

The Threatt Filling Station. Maurice L Threatt thinks this might be his uncle Ulysses who gave a comprehensive statement about the stop Beach and his murderers made minutes before he was slain.

Sometime after dark, probably only minutes after leaving Luther, and while on US Highway 66 northeast of Oklahoma City, Klettke – who was in the rear seat – fired four bullets into the back of Mr Beach’s head. Somehow the first shot missed and the other bullets were fired as Beach was turning around in his seat. The pair dumped the body under a bridge in Arcadia and fled with the car.

Harry Riskin in the photo taken by a press reporter after his arrest. He would plead guilty and put all the blame on Klettke.

Carl Beach’s body was found by school bus driver, Robert Traylor, on the morning of 3 November 1948. The pair got as far as Fort Worth, Texas, where Herman Edgar, an attendant, at the Allbright Parking Lot became suspicious of the blood spatter and bullet holes in the car and called the police. Klettke and Riskin were arrested at the Slebold Hotel after returning from a clothes buying spree and Riskin was quick to blame his friend for the murder. They had taken $474 from Mr Beach but missed another $900 in the trunk which was found by police.

After two reprieves, Klettke went to the electric chair on 4 January 1951 at McAlester State Penitentiary, Oklahoma. He was buried beside his mother in Oak Hill Cemetery, Owosso, Michigan. Riskin, who pled guilty, was sentenced to life imprisonment. Klettke would say that he too had wanted to plead guilty but hadn’t been allowed to do so by the prosecuting attorney.

Life imprisonment didn’t mean life even then, but it ended up being longer than Harry Riskin imagined. Riskin was paroled in the 1950s while still in his mid-20s but was returned to prison with psychiatric problems. He was paroled again in 1959 but three years later suffered a nervous breakdown and went back to prison for treatment. He was diagnosed as a paranoid schizophrenic and was later the subject for prison authorities seeking a review of how mentally ill prisoners were assessed for parole. In October 1974 Governor David Hall signed a parole, but Riskin who was then in the Eastern Oklahoma State Hospital for the Insane in Vinita never signed the necessary parole certificate. Parole was again denied in 1979. Harry Riskin is no longer in the Oklahoma prison system.

There was a campaign for clemency for Klettke which failed. First the electrodes were fitted the wrong way and then the blindfold that Klettke had asked for during his execution slipped off.

5 thoughts on “A BODY IN ARCADIA”