The cheery children’s attraction has a surprisingly forbidding appearance.

Of the many trading posts to be found along Route 66, it’s surprising to learn that less is known about one of the most recent than of those that ceased to exist decades ago, such as the Rattlesnake Trading Post and Bowlins in Bluewater, New Mexico. But, just across the border into Arizona, Fort Courage, which only finally closed a couple of years ago, is quickly falling into disrepair and obscurity.

The sign with its cheery F Troop cartoons and disregard for copyright!

The site of a trading post since 1924 when Joseph Grubbs opened the White Mound Trading Post, the tiny town of Houck – originally known as Houck’s Tank after the man who founded it and, yes, his water tank – served first one alignment of the Old Trails Highway and then Route 66. When Route 66 was rerouted in 1933, Grubbs moved his store to where Fort Courage now stands. The White Mound, which also acted as Houck’s post office, finally closed in 1948.

Then, in the late 1960s, Fort Courage was built as

an unashamed tourist trap. It was an exercise in cashing in on the success of the short-lived but popular television series, F Troop. There was no actual link between the two and it certainly wasn’t the series’ location, but the owners tacitly encouraged the idea that this was where the TV programme had been filmed. There was also little note taken of copyright – postcards from the 1970s show signs that read ‘HOME OF F TROOP’ although they disappeared in later years. Thousands of parents over the years must have been nagged by kids to stop at Fort Courage, and those parents were catered to by the trading post which stocked the usual plethora of Indian goods along with tourist tat, as well as becoming a small supermarket and a post office towards the end of its life.

Pancakes, coffee, tacos – now all off the menu.

Next to the trading post is the abandoned Pancake House which was originally built as a restaurant by Van de Kamp’s Holland Dutch Bakery of Los Angeles. The company had a chain of windmill-styled bakeries around LA and plans to extend across the country with a distinctive windmill building design. The concrete building had sixteen sides to give the appearance of being round, while the roof would have once supported a giant windmill, although no photographs appear to exist of this. Van de Kamp intended to build 40 of these quirky buildings by 1970, but never came close to that figure. The Houck Pancake House is one of only two of the designs to survive; the other is in Arcadia, California, where the building is now a Denny’s (and that company had wanted to demolish it in 1999 before a local outcry forced a change of mind). The Pancake House also housed a coffee shop and, if you believe the signs, a Taco Bell. Personally, I would treat that with a pinch of salt and a Fort Courage type of disregard for legalities. It’s far more likely that it was an Ortega’s Tacos, named after Armand Ortega who ran the trading post for some years.

This would have originally had a windmill rather than the sign, but there’s no proof it was ever erected.

Today the trading post, gas station and restaurant are shuttered and fenced off, but it’s still possible to walk around Fort Courage. Some of the buildings were converted into apartments but they lie open and derelict, personal belongings strewn knee deep.

The interior of an abandoned apartment in the ‘fort’.

History has not been kind to Fort Courage. Opened less than fifty years ago, there seems to be no record of even when it actually opened, let alone any details of what is likely to become of it. Faded billboards along the interstate still exhort the traveller to stop, but there’s no longer any genial welcome at Fort Courage. Its single legacy seems to be in the late night reruns of F Troop when viewers of a certain age might pause and think, ‘Didn’t we stop on the film set in Arizona when I was a kid…?’ 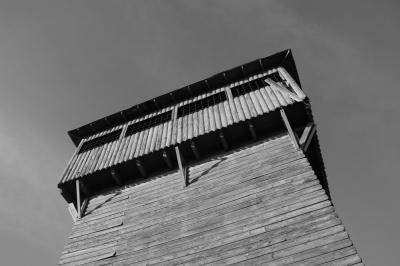 The tower is boarded up but still in good order.

6 thoughts on “THE COURAGE THAT FAILED”