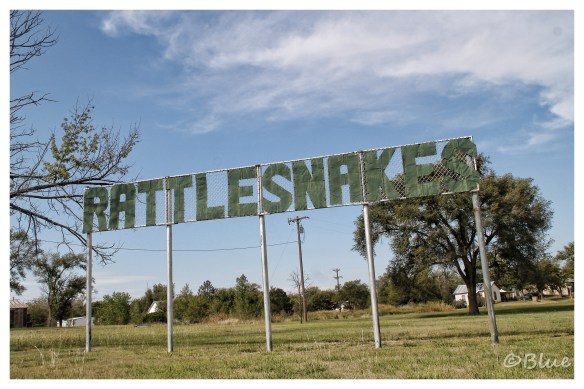 Travelers through McLean in the Texas Panhandle, may be a little bemused – not to say anxious – about a large sign declaiming RATTLESNAKES that stands by the side of the road in the town.

Once this sign stood just off Route 66 near what became the Lela exit of I-40. Ernest Michael ‘Mike’ Allred had operated snake attractions along Oklahoma’s stretch of 66 for several years before setting up shop in Texas at Alanreed with his sister Addie as the Regal Reptile Ranch (he had another sister and two brothers who seem not to have shared their siblings’ love of reptiles and, in fact, all three ended up in California to put a few miles between themselves and their brother’s creatures!). However, when he and his sister fell out, he decamped with his snakes down the road to Lela, which is the site that the sign originally advertised. He set up home in a gas station owned by Conald Cunningham*, a place which had a huge neon steer adorning its roof, and it was Cunningham who erected the reptiles sign. It was originally a tall sign with RATTLESNAKES at the top and EXIT NOW below. 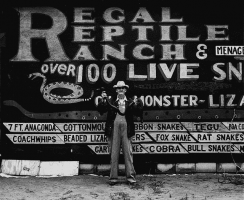 This image is of E Mike Allred, but of a time when the Regal Reptile Ranch was in Erick, Sayre. Given that the Smithsonian Institution and the photographer, Steve Fitch, date this photo as 1972 and Allred appears to be an old man in the picture, then it seems his reptile attraction in Lela was probably rather short-lived.

When Allred died in 1979 at the age of eighty, Addie, who was still running her snake attraction in Alanreed, apparently either moved to operate the Lela concern or moved the Allred’s snakes to Alanreed, depending on which story you read. However, Addie continued to run a reptile attraction right into the 1980s, one of the last of the old time snake pits on Route 66. Some of Allred and his sister’s snakes (now pickled!), along with the yellow cobra that lured people off the highway, can been seen in the Devil’s Rope Museum in McLean

The old gas station was eventually dismantled, moved and became part of the Red River Steakhouse in McLean, although no-one seems to know what happened to the neon steer. The RATTLESNAKES sign continued to stand in its lonesome glory but was eventually blown down in 2007. It might have been lost forever without the work and determination of local writer, historian, carpenter, rancher, the guy who started the Texas Route 66 Museum (the first museum dedicated to the Mother Road) and all-round useful chap, Delbert Trew, who saw to its rescue. It’s now erected in a park on the north side of 1st Street between McCarty and Donley Streets, McLean.

*I’ve seen this gentleman’s name written as both ‘Conrad’ and ‘Conald’. I assumed the latter was a misprint of Donald or Ronald, but no, there is a Conald Cunningham buried in McLean and who was a member of the McLean Lions. However, according to his obituary, Conald Cunningham of Mclean worked in the USAF and then as a computer programmer.  The research goes on…

1 thought on “SNAKES ON A PLAIN”