One of the most novel stays on all of Route 66 is, of course, the Wigwam Motel in Holbrook, Arizona. To be accurate, they’re more teepees than wigwams, although teepees were technically portable and a construction of concrete and steel isn’t really all that mobile. But semantics aside, Wigwam Village #6, as it was originally known, offers not just a chance to sleep in a unique room, but to capture a little of the essence of travelling the Mother Road in its heyday. 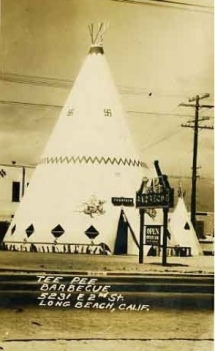 The whole idea of a wigwam complex was that of Frank A Redford from Horse Cave, Kentucky. Where the idea came from is open to debate – some say Frank was influenced by dwellings on a Sioux reservation in South Dakota, although the preferred story is that, on a trip to California in 1931, he saw a concrete building called the Tee Pee Barbecue, a drive in built by James H Estes in Long Beach in 1927.  Back in Horse Cave he built a copy of the Tee Pee barbecue, operating it as a gas station and café. In 1935 he added six tourist cabins, also in the shape of teepees. The idea of the Wigwam Village – Frank didn’t like the sound of ‘tee pee’ – was born and patented in 1936.

Postcard showing the large teepee at the front which was demolished at some point, although the two smaller wigwams remain.

The following year, he built Wigwam Village #2 (which still exists) in Cave City, Kentucky, and it was this motel which was seen by Chester E Lewis, a businessman who operated a number of motels along Route 66 and elsewhere in Arizona. He was so captivated by the oddly-shaped cabins that he decided to build a village of his own and came to an arrangement with Frank Redford. Instead of a now traditional franchise idea, they agreed that radios would be placed in each room of the new motel that would play for a half hour upon payment of a dime. Frank would then receive the dimes from the radios in exchange for allowing Chester Lewis to build his wigwams.

The Wigwam Motel in Holbrook opened in 1950 with 15 teepees on three sides and, on the fourth, the office which, along with two smaller wigwams, originally operated as both office and Texaco gas station. Each tepee houses a round bedroom, tiny bathroom and shower, although the ceiling is normal height rather than extending to the tip 32 feet above. That same year, the seventh and final Wigwam Motel opened in San Bernadino, California, the project overseen by Frank Redford who would die there some seven years later. (Incidentally, the year that the last two motels opened was also the same year that the inspiration for it all, the Tee Pee Barbecue, was demolished). 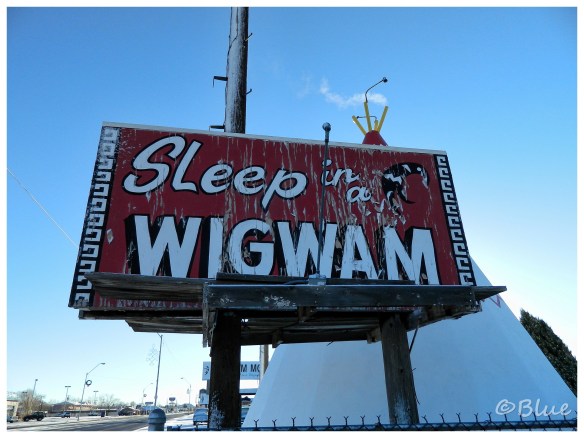 What traveller could refuse!

For the next twenty-four years, the Wigwam welcomed visitors with its exhortation of SLEEP IN A WIGWAM until Holbrook and Route 66 was bypassed in 1974. Chester closed the motel and it stood sadly by the side of the highway as Interstate 40 and time passed it by. Chester passed away in 1986, after which his widow and children – sons Paul and Clifton and daughter Elinor – decided to renovate the motel and reopen it, which they did in 1988. They restored the original hickory furniture and fittings; to suit the modern traveller, cable TV and air conditioning units were fitted, there are no phones and the rooms are comfortable if basic, although they do now have wifi. Classic vehicles decorate the parking lot, including Mr Lewis’s own Studebaker.

In one of the single bed teepees.

The Lewis family continues to run the Wigwam Motel which was added to the National Register of Historic Places in May 2002. It remains as popular now as it was in the 1950s and booking is always advisable. Alas, the rooms no longer have the dime-operated radios and I can only assume that agreement between Mr Redford and Mr Lewis lapsed long ago. 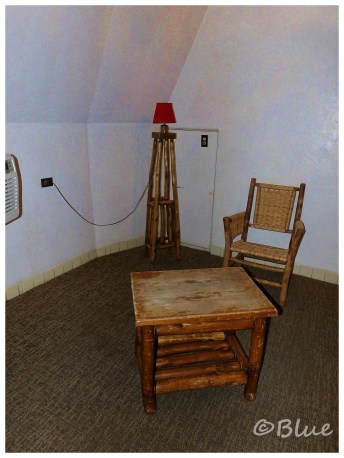 Some of the original hickory furniture.

This 1955 Buick Special would have been almost new when the Wigwam Motel opened.

Gas pumps originally stood where the cars are parked. 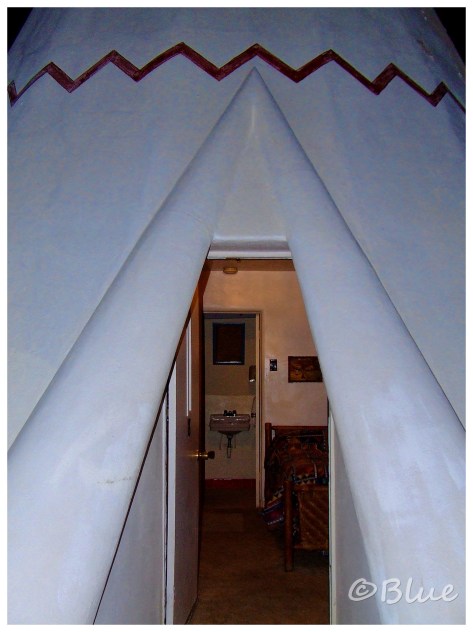 Welcome to your wigwam.