To the right, the shell of the Trading Post and behind it, the Wilson’ house.

Roadside attractions on Route 66 came and went with varying degrees of success and durability but perhaps one which has been comprehensively forgotten and about which little history survives was the Frontier Museum between Santa Rosa and Cuervo in New Mexico. 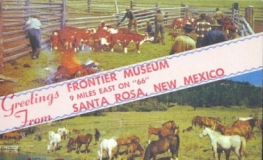 There looks to be a certain amount of artistic licence with this postcard. The Museum never advertised its herds of cattle or horses and the countryside certainly doesn’t look like this bit of New Mexico!

But, back in the 1950s, when people would stop at almost anything to break a tedious journey, the Frontier Museum, around 10 miles east of Santa Rosa, welcomed countless visitors. The kids were attracted by the exhibits, the ‘real’ cowboys and the Wild West trading post, the adults probably more so by the cafe and the chance of a cold beer.

The Frontier was a complex which included the museum, complete with not very well painted murals on the side, the Trading Post, a service station, the Old Gay 90s Frontier Bar and three residential houses, all constructed in Western style. It was run by William S and Lucy Pearl Wilson; Lucy had been born in Pratt, Kansas, but moved to her husband’s home town of Texline in Texas when she was 18. William was a car mechanic and railroad worker and they lived in Texas with their two children, Charles and Jaunita (known as Nita) until buying the Frontier. 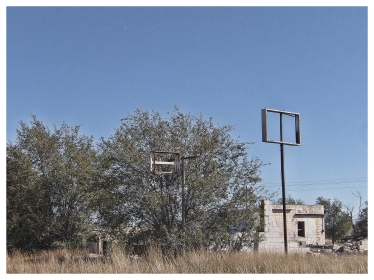 The Frontier Museum, now mostly collapsed, but still with the skeleton work of the original signs.

The museum was, as is the case with these places, a mixture of the old and the faux. Albuquerque carpenter, Roy Mattson, spent a year building a full scale exact replica of a Concord stagecoach in which retired rodeo rider, Hondo Marchand, would give rides to tourists. (Either this wasn’t a huge success or he fell out with the Wilsons because, by 1959, he was over in Anderson, Indiana, giving rides to shoppers at the Hoosier Supermarket.) Hondo, incidentally, was, as a young man, taught rope tricks by Will Rogers at the 101 Ranch in Bliss, Oklahoma and travelled with Will Rogers’ Wild West Show. He – and the stagecoach – would later retire to Texas with his wife, Dot.

The Museum complex – along the front would have been the cafe and the Old Gay 90s Frontier Bar.

Why the Wilsons chose to move in middle age to New Mexico to run a tourist attraction and cafe is unknown, but by 1960 they had clearly had enough. The complex was advertised for sale or trade in the Clovis News-Journal of 11th December 1960 and, at the bottom of the advert, Mr Wilson plaintively wrote; ‘I would like to retire’. Eventually the Wilsons did retire – although no-one was interesting in buying the property – and then Lucy died suddenly in 1977.

The service station on the Frontier Museum’s 76 acres.

It was finally the end for the Frontier Museum which had been shut up for years. The contents were sold to an orthodontist in southern California; Dr Alan Barbakow bought everything from sets of false teeth to ten horse-drawn wagons, much of which he used to decorate his offices. There was so much stuff that he hired 10 volunteers to each rent a car and trailer and transport the artifacts from Santa Rosa to Santa Clarita where the wagons were all restored before being put on display.

Dr Alan Barbakow and some of his Frontier Museum collection. Photo by the Santa Clarita Signal.

Dr Barabakow retired around five years ago but he continues to cherish his collection of Western paraphernalia. The Frontier Museum and its buildings have not fared as well. After William Wilson’s death in 1983, the place was abandoned. Little remains of the buildings which housed the museum and cafe, while the Trading Post and service station are mere shells. Where people stopped to see cowboys and stagecoaches, the traffic thunders by on I-40 with few people even realising that was ever anything there. 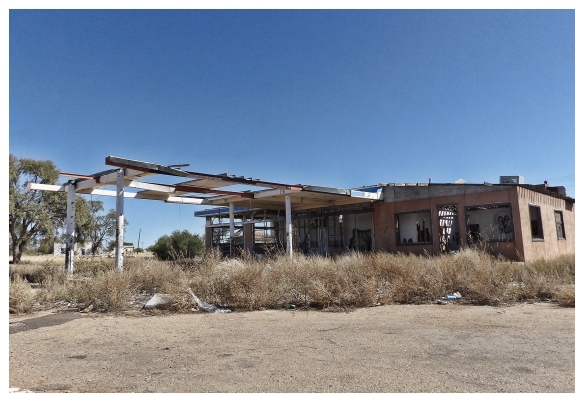 The service station on the Frontier Museum’s 76 acres. 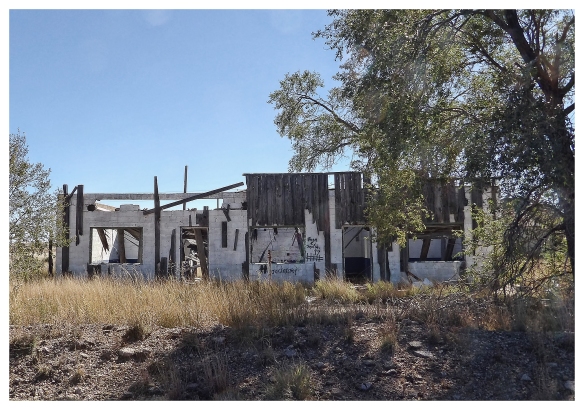 This was once the Trading Post although little now remains of its original Wild West-style wooden cladding.

For photos from 2003 before the place became completely derelict, I recommend http://www.lightrainproductions.com/Trip%20Reports/Frontier1.htm

The Frontier in its heyday – cowboys, Indians and beer, what more did the traveller need? 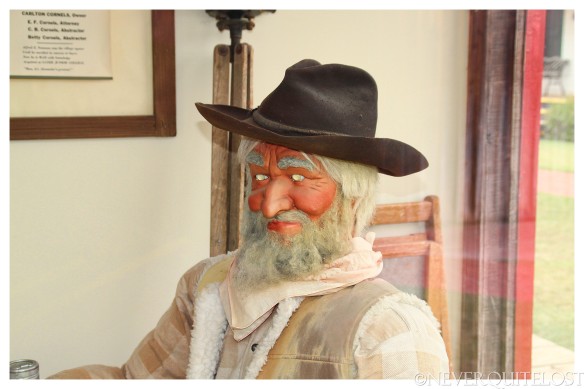 Sometimes I still wake up in the night terrified of this old-timer. It’s not natural to have glowing eyes, even in Oklahoma.

There are Good Things and Bad Things about travelling on your own. The Good Things include eating rubbish for days on end and being able to drive 50 miles off route because you spotted a sign saying ‘World’s Biggest Ball of String’ without having to have a lengthy discussion with your co-pilot as to whether you have time, whether you need to see the World’s Biggest Ball of String (for me that goes without saying, although I am constantly surprised when I find myself to be in a minority of one on this matter) and if it will actually be the World’s Biggest (unlikely, but do you want to take the chance on that?).

Although knitted hair may never make a comeback, this chap will be delighted to know that his big painted on eyebrows are all the vogue with young ladies.

The Bad Things include eating rubbish for days on end and going a little bit strange. Talking to yourself is acceptable; having full-blown conversations in two different voices perhaps not so. I know I’ve been out there on my own too long when I get fits of giggles about things. And so it was at the National Route 66 & Transportation Museum in Elk City, Oklahoma.

Now, before I go any further, I cannot recommend the museum highly enough; not only does it have an excellent museum devoted to Route 66, complete with copious paraphernalia and classic vehicles (including a recreation of the Joads’ truck), but the extremely reasonable price of your entry ticket also allows you to roam around the Farm & Ranch Museum, the Blacksmith’s Shop Museum and the Old Town Museum.

It was in the latter that things started to go a little awry. Like the rest of the place, the Old Town Museum is an excellent and loving recreation of times past, with shops, houses and a school. To add verisimilitude, the creators had installed mannequins. 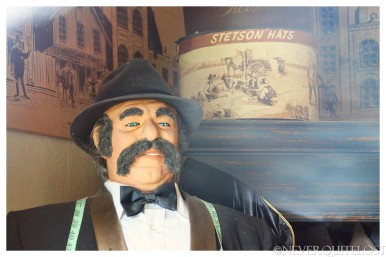 Why a trilby rather than a Stetson? My theory is the creators used all their hair up on his luxurious moustaches and sideburns and had nothing left for his head.

Just like the people they were intended to represent, these were a mixed crew; there were a few who had clearly started their careers in the windows of department stores, the passing of the years marked by the changing of their wigs, while others were more ambitious and may even have been salvaged from an out of business waxworks museum. They were all, well, slightly odd and while if I had had someone to point this out to, the matter might have dropped there. But I didn’t. All I had was a rising hysteria that increased with each new tableau. Fortunately it was early and the museum wasn’t yet busy, but people did begin to look. That didn’t make matters any better. There were other photos, but by now I was giggling so much everything was destined to be out of focus, including myself.

Half surfer dude, half baker.

Please do visit the National Route 66 & Transportation Museum and don’t just stop and take a photo of the big 66 shield and Myrtle, the Giant Kahina, and pass on, because the whole place is really quite wonderful. Even the mannequins which, in their oddness and homemade quality, somehow capture the essence of roadside Route 66. Just behave with a bit more decorum than I did.

As if it wasn’t enough to make him wear a hat several sizes too small, what indignities have been committed on this poor man’s ears?