Arizona has many ghost towns, but among the finest is Vulture City near Wickenburg. It began life in 1863 after Henry Wickenburg discovered the Vulture mine (supposedly he was retrieving a vulture he’d shot when he found it). Gold fever would lead to a town of some 5000 people with a school, post office, saloon, stores, brothel, assay office (and, in later years, a gas station) becoming, at the time, one of the richest towns in Arizona. In order to feed a town of this size, Jack Swilling reopened irrigation channels in the Phoenix Valley that had been dug by Hohokam Native Americans and established a grain route; Wickenburg was directly responsible for the development and growth of Phoenix. 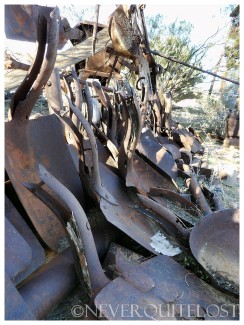 Over the years, the Vulture Mine produced $200 million of gold, although it’s likely almost as much simply disappeared into various pockets. The assay office was particularly prone to being burgled and thousands of dollars of gold was stolen over the years. 18 men are supposed to have been hung from the Ironwood tree which still stands (next to Henry Wickenburg’s cabins), all of them guilty of stealing gold or ore, although there’s no record of any such hangings actually taking place. It’s a good story though.

Henry Wickenburg sold the mine in 1866 for $85,000 but was swindled out of all but $20,000 after the owners claimed he didn’t have clear title to the mine. He spent years trying to sue the owners, running through every penny he had. On 14 May 1905, ill, tired and destitute, he put a gun to his head and pulled the trigger. 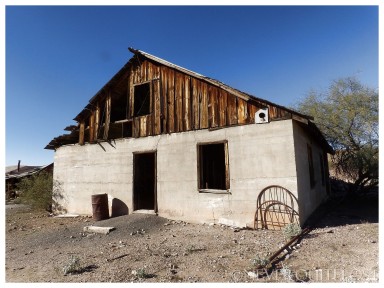 Vulture City lasted until 1942 when the mine was closed on order of the government. Production had slowed considerably years before and the job had become ever more dangerous. In 1923, seven men were killed when the ceiling of a large underground chamber collapsed in on them, burying them and their twelve burros in the Glory Hole. Although the mine did reopen in the 1940s, it wasn’t for long and it soon closed permanently. Today Vulture City and the Vulture mine is privately owned and private property, although it does offer tours on weekends.